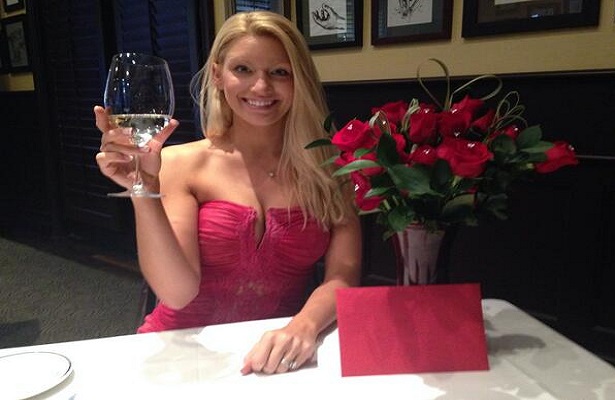 Lacey discusses being Von Erich Kerry’s daughter, his death, her wrestling career and being a mom. He was the “Modern Day Warrior” and the “Texas Tornado.” And she was his little girl. Check out these recent photos of former TNA Knockout Lacey Von Erich:

But when you are a Von Erich and part of one of the most famous families in wrestling history, family extends beyond blood relatives. It extends through generations and legions of fans, especially in Texas. “My dad was charitable and caring,” said Lacey Von Erich, daughter of the late Kerry Von Erich. “We used to have to get a huge table if we ever went out to dinner just to have fans be able to sit with us.”

The name Von Erich doesn’t actually translate to the words “pro wrestling,” but a case can be made that it should. It also, though, often has meant more heartache than one family should have to bear. Fritz Von Erich (real name Jack Adkisson) was a longtime pro wrestler and promoter who had six sons. His first son died at age 7 in 1959. His five other sons became wrestlers. Only one lived past the age of 33. Kevin Von Erich is now 63 years and lives in Kauai, Hawaii.

More than 27 years ago, Kerry Von Erich became the second Von Erich brother to take his own life. Kerry shot himself in the chest at the family farm in Denton County, Texas. Lacey was 6. Her sister Holly was 9. “With the addiction to painkillers, the divorce and the death of his family, I don’t blame him for taking his life,” Lacey, now 30, said. “His brothers died and he was secretly wrestling with one foot because of a motorcycle injury.

“But before he died, he fought in the ring better than anyone, put his fans above himself and will always go down as the greatest wrestler that ever lived. I know I’m biased.”

A former NWA world champion, Kerry was in a motorcycle accident in 1986 and had to have his right foot amputated about a year later. Everyone around him was sworn to secrecy, including the doctors and nurses at the hospital, and his physical therapists.

An athlete all his life, he never wanted to show any weakness, especially in the cutthroat world of wrestling.

He continued in the ring — never letting on about the injury and even winning the WWF Intercontinental title in 1990 — but became addicted to painkillers and other drugs. A day before his death, a judge had signed an arrest warrant to revoke his probation following a second arrest for drug possession after he was caught with cocaine.

He killed himself hours before he was scheduled to wrestle at the Dallas Sportatorium, the arena his family helped make famous. It was scheduled as an “Iron Claw Match,” the trademark move used by all the Von Erichs.

Having seen the demons that can haunt wrestlers, Lacey said they can either make you stronger or make you weaker. You can either learn from the experiences and be a better person, or struggle and end up self-medicating or worse. She has been writing a book with a working title of “Wrestling With Ghosts.”

“It’s about my life and family and ins and outs of the wrestling business, especially the drugs and suicides due to the steroids and concussions,” she said.

Wrestling and family. Family and wrestling.

When you’re a Von Erich, it’s hard to separate the two.

And so Lacey became the first third-generation Von Erich to get into the business. Kevin’s sons, Ross and Marshall, later became wrestlers.

“I never even thought of ever becoming a pro wrestler,” she said. “Vince McMahon called me and asked if I wanted to be a Diva. I had no idea what that even was.

“Seeing as how everyone in my family died that wrestled, it was a very sore subject in my family. He flew me out so I could check out a show and I cried a lot. Even though the show was very different than when I was young at the Sportatorium in Dallas, the smell of the Bengay and seeing the guys taping up their wrists, it reminded me of being in the locker room as a child. I signed the contract to wrestle that night.”

That was August 2007, and six weeks later, Lacey appeared as a valet in Florida Championship Wrestling, then WWE’s primary developmental territory. Two months later, she made her in-ring debut against Natalya.

Her WWE stay was brief. She was with the company less than six months.

“I was single, had an 8-month-old baby and was 20 years old,” she said. “It was hard to go to training in Florida. It was hard to have someone watching my new baby, not knowing anyone, and all the terrible lies and betrayal that wrestlers would say about you to make sure you didn’t make it to the big show because they were worried you would be more famous than them.

“I couldn’t take it anymore and was very much in love with my boyfriend Grant, who is now my husband. He lived in California and I lived in Florida and I quit to be with him.”

For the next two years, she moved to the independents, where she could better control her schedule. In October 2009, she signed with TNA and aligned herself with the Beautiful People. She would become part of the Knockouts tag team champions. A year later, she decided to retire.

“My husband and I wanted more kids and that’s when I stopped working,” she said.

She is now the mother of three – Daniel, 10, Trip, 4, and Barbara, 11 months – and is head of the local PTA for a school district in the Los Angeles area. Getting out of line at PTA meetings could mean an iron claw.

What if one of her children wanted to become a fourth-generation Von Erich in wrestling?

“I wouldn’t recommend it,” she said. “Life is tough. Late nights. Always traveling and it’s hard to have a family. My husband owns a financial firm and is home every day at 4:30. We have lunch together and travel a lot. I want them to have a life like mine is now.”

The wrestling bug is not completely gone even six years after her in-ring retirement. Von Erich is part of a group of daughters of wrestlers working to form their own all-female wrestling company. She is working with Brooke Hogan, daughter of Hulk Hogan; Ariel Piper, daughter of Rowdy Roddy Piper; and Brittany Page, daughter of Diamond Dallas Page.

Since Von Erich is the only one among them who has been in the ring, she is serving as “coach and choreographer,” she said.

“We are starting very, very soon,” she said. “We have a lot of TV prospects… But we are going to start touring now that we have a lot of our talent nailed down.”