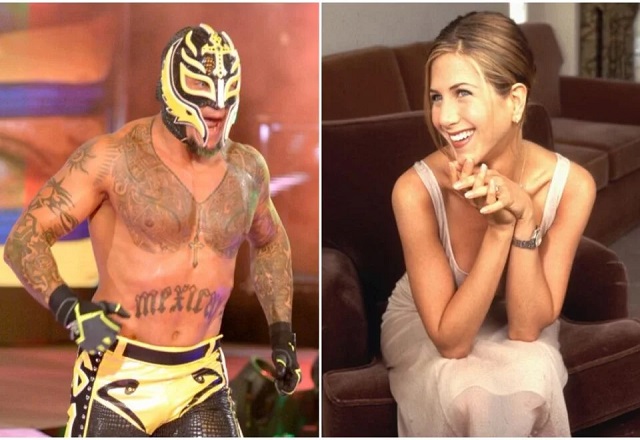 In 1997, an article which was posted by the Nation Enquirer detailed the supposed close friendship between former WWE Champion Rey Mysterio and Jennifer Aniston, who was in Friends at the time.

The article, which was published in magazine New Idea, saw Rey Mysterio allegedly speak about the relationship he had with Aniston at the time: “Jennifer is a big fan of mine and I’m a big fan of hers.” The article even claims that Mysterio explained that Aniston had been to some of his wrestling matches. For context, he was working for WCW at the time:

‘She’s been to four of my matches and we’ve become good friends. She told me she loves my wrestling.’ The supposed friendship between the WWE Raw star and Aniston was so strong, that the luchadore let Jennifer see him without his mask:

“I always wear my mask — ALWAYS!! It’s a big tradition in Mexico, my native county,’ he added. ‘But I broke tradition when I met Jennifer. I actually let her see me without my mask backstage. I’ve never done that for any of my fans. She really got a kick out of it. We talked for some time and exchanged home phone numbers.”

Mysterio married his wife Angie Gutierrez, who he is still with to this day, the year before the article was posted. However, that didn’t stop people speculating that Aniston and Rey were romantically involved.

In an issue of the Wrestling Observer Newsletter at the time, Meltzer explained that WCW wanted to push him heavily, which was the reason behind the story: Writing in the Wrestling Observer, he claimed: ‘There’s absolutely nothing to that one. It was just an attempt, which succeeded, to get Mistero Jr. some pub since WCW wants to push him big-time.

It seems like the story was completely made up, as Jennifer Aniston dismissed the story the same year that it came out, saying that she’d “never met a wrestler” before. Mysterio also commented on the rumours, saying in his ‘Behind the Mask’ book that was released in 2009 that he still has a copy of the article.

The wrestling legend says that he has “no idea” where the story came from, but speculated that it could have come from someone who wanted to get his name out there. ‘I have no idea what that was about or where it came from. Maybe somebody wanted to get my name out there and started the rumour, Anyways, I thought it was funny. I even showed the story to my wife — best coming from me, no? The locker room got on me for it.

Rey explained that the WCW locker room loved teasing him about it, even doctering pictures to make it look like he and Jennifer were together: ”Hey, Rey, what’s up with you and Jennifer?” someone would ask. “What do you mean?” I answered. “What’s up?” They wouldn’t let it die. Over the next few weeks and months they were ribbing me in all sorts of ways. I’m lucky Photoshopped pictures of me and Jennifer didn’t appear on television somewhere.’