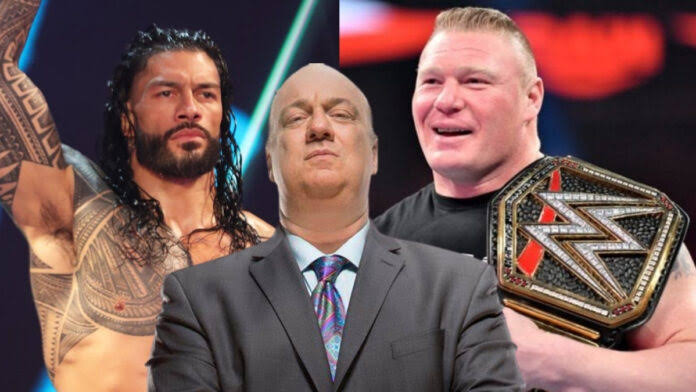 WWE Universal Champion Roman Reigns joined BT Sport’s Ariel Helwani, which was recorded prior to SummerSlam. The Tribal Chief spoke about his alliance with Paul Heyman and where it started.

“I really, thoroughly enjoy having him by my side,” Reigns said. “I’ve sung his praises many times, he just knows how to make an elite performer very comfortable in their skin and how to hyper focus on the task at hand and put that performance first above all else.

That’s what he does to make that comfort and to be able to have that tunnel vision for that day, that night, that week, whatever it takes to get to that point.

“Paul, he’s been a pleasure to work with not only on a professional level but personally just being around him, talking to him, sharing stories with him, hearing the history with my family, all his knowledge of the business, of WWE, all the way back to Vince Sr.

It’s really been an education being around him, I wouldn’t want to go back to [a time without him]. If my day does come where I leave for a while and then I come back, guess who’s going to be with me? Paul Heyman.”

Reigns also spoke about help he has received from Heyman and others in the locker room during his career. The Universal Champ noted that he’s never sought help from anyone.

“[Heyman] helped from a distance,” Reigns mentioned. “Kind of like John [Cena] did and everybody for the most part, just let me figure this thing out. I didn’t have anybody try to elbow their way in to be in my circle, it was a process that I was really able to craft myself.

That’s something I was told early on, be very specific with who you get advice from and don’t make that circle too big.

I didn’t want to get too many opinions, too many people at that table throwing ideas at me because I wanted to be able to narrow in on what I wanted to do and what I was trying to figure out what to do or how to do it.

“I also wanted to build the instincts and go through the process and have to do it myself as well because that helps down the road so much more if you’re able to do things on your own. Paul, he was the guy who brought The Shield in to protect CM Punk’s title reign. There’s always been great foreshadowing of easter eggs along the way with me and Paul, my history with Brock obviously.

Working with Paul threw that and his history with my family man, I mean I want to say he first met me when I was three or four somewhere in Alabama. He’s been around my family, my father, my uncle, for a long time.”

Brock Lesnar returned to WWE at SummerSlam on Saturday night. While the interview was recorded before Lesnar’s return, Reigns was asked about a potential match with Lesnar and who would have Heyman’s support.

“His Tribal Chief, that’s who,” Reigns answered when asked about Heyman choosing between him and Lesnar. “That’s the history, that’s the past, I’m moving him forward. Island of relevancy, he won’t forget that.”

If you use any of the quotes in this article, please credit BT Sport with a h/t to Wrestling Inc. for the transcription.

Reigns vs. Lesnar Was Planned for WrestleMania 2023; Rock Match in 2022