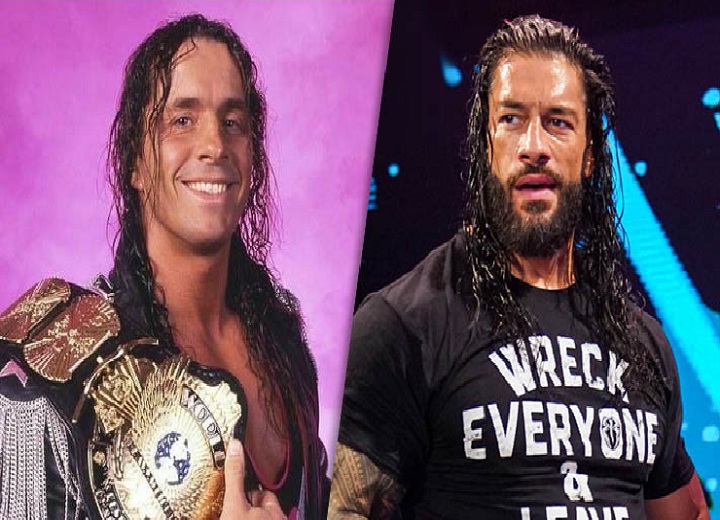 Roman Reigns comes from a golden heritage of Professional wrestling. His direct and indirect relatives were all WWE legends or even current Superstars on the roster.

There really isn’t a doubt why “The Big Dog” himself got inspired to enter the squared circle. However, Reigns also drew a huge liking to another Hall of Famer who inarguably defined professional wrestling decades ago.

In a recent interview with ESPN, Roman Reigns revealed who his favourite non-family wrestler was.

“Bret Hart. Bret “The Hitman” Hart was kind of my guy. A lot different from years with the Ultimate Warrior. There’s just something I respect that he was a journeyman, like a blue-collar you know, a sports entertainer, that pro wrestler going in there and wrestle for 30 minutes every single night,” says Reigns.

Reigns was asked to give his thoughts on The Rock’s recent comments about him where he expressed interest in stepping into the ring with Reigns at WrestleMania.

Reigns said, “It would be amazing. For any Superstar of my generation to have someone on his level, someone that has done so much not only in sports entertainment but the movie industry and entertainment in general.

The man has like a billion followers online and stuff so to be able to put that type of spotlight on our current generation and what we do within our product in WWE, that would be amazing.

To just continue it and take it to the next level, that’s what I’m trying to do every single time.”

Reigns which wrestler that he was not related to that he looked up to when he grew up. He said, “Bret ‘The Hitman’ Hart was kind of my guy. A lot different than [larger than life characters, such as] Ultimate Warrior.

There’s just something I respected, he was like a journeyman, like a blue-collar sports entertainer, that pro wrestler that would go in there and wrestle for 30 minutes every single night. He just put a different dynamic on what the top looks like.

And I like to think that we have a little bit of all of that nowadays. We’ve kind of had to mesh having the character, having the swagger, and also putting in the 20-30 minutes of work if you have to.”

Edge reveals what Bret Hart told him: Edge says, “I don’t care what anybody else says”