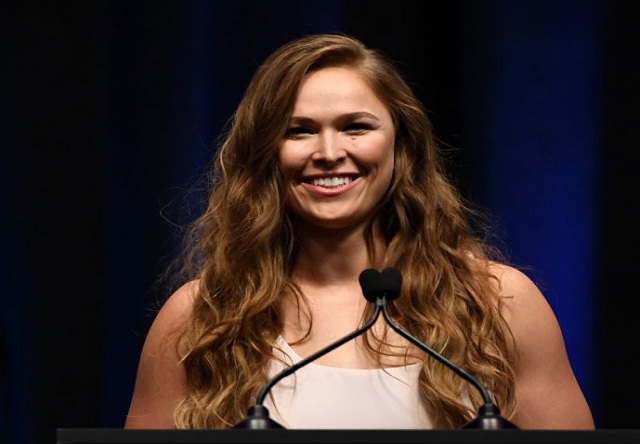 It’s evident that she should come back at one point but that may not happen, anytime soon especially at this point when the world is moving through a crisis courtesy of the COVID-19 pandemic.

The UFC Hall of Famer confirmed that she may return to perform in the WWE but there’s no way that she’s ever going to perform in a full-time schedule for WWE.

She is just not ready to dive into that hectic schedule given by the biggest pro-wrestling promotion of the world. Back when she entered the business, she went through the entire process and hence decided to stay on the road but now there’s no way she’s going to leave her usual lifestyle.

“Well, if I ever do come back it will never be at a full-time capacity ever again. I think for like chunks of time, you know?” Rousey said H/T to wrestlingnews.co. “I’m very much like an obsessive person or I like to obsess over something for a certain time and then kind of go take some time to obsess about something else.

“But no I’m never gonna be full time again over 200 days a year on the road like that ever again. It’s just it was I needed to do it in order to learn and get immersed into it and really understand what was going on, but it’s just not the lifestyle for me.”

The Baddest Woman on the Planet then donned her heel avatar and took shots at the WWE fans mentioning them as ‘ungrateful’.

She’s just not ready to entertain the same fans who booed her thoroughly despite her dedication towards the wrestling sport. Rousey discussed the WWE Universe and shared her experience with the WWE Universe with below comments.

“What am I doing it for if I’m not being able to spend my time and energy on my family, but instead spending my time and my energy on a bunch of f–king ungrateful fans that don’t even appreciate me?” Rousey said H/T to Yahoo Sports.

“The thing is, I love performing. I love the girls. I love being out there. But, at the end of the day, I was just like, ‘f–k these fans, dude.’ My family loves me. They appreciate me. I want all of my energy to go into them.”

Ronda Rousey had a solid run in the WWE that lasted a bit longer than a year. For most of that tenure, she spent as the WWE Raw Women’s Champion and a babyface figure.

But during the end of the stint, Becky Lynch’s growing popularity overshadowed her star power forcing her to convert into a heel and put over The Man as the new runner of the Raw Women’s Division.

The former UFC Bantamweight Champion was rumoured to make a comeback at WrestleMania 36 at some point which never happened. Rousey was also seen at WWE HQ at Stamford, Connecticut a few months ago to have some creative talks with WWE officials about her future.

She was last seen at WrestleMania 35 main event to drop the title to Becky Lynch and go on to an impregnation vacation.

Related Topics:Ronda Rousey
Up Next

WATCH: Alexa bliss was interrupted at the point of putting on her clothe