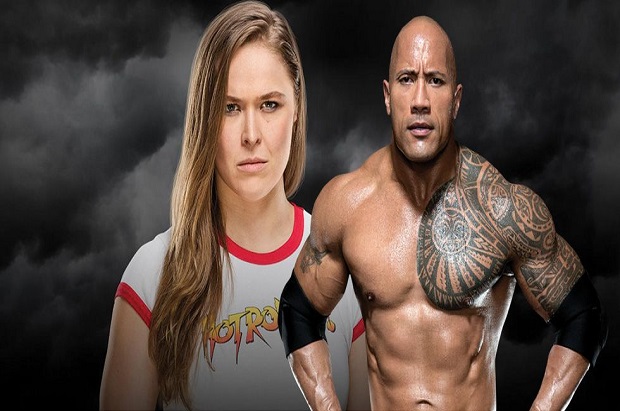 The Rock and Ronda Rousey are not the only ones to show talent in the ring and on the big screen. The following movies feature multiple wrestlers.

Wrestlers like The Rock, Ronda Rousey, Batista, and John Cena have shown that special talents can thrive in two completely different worlds like professional wrestling and acting.

The concept of wrestlers appearing in movies is no longer strange, but it is highly unlikely when multiple wrestlers appear in the same movie outside of the WWE Studios films.

Any movie to feature two or more wrestlers will likely stand out to the average wrestling fan looking to find something fun to watch.

The casting is often intentional, but there are times where multiple wrestlers just did the best in their auditions for the roles. Find out which films are worth going out of your way to watch as a diehard fan. The following movies feature multiple wrestlers on the cast.

The Rock and Ronda Rousey (Furious 7)

WrestleMania 31 wasn’t the only time The Rock and Ronda Rousey worked together in an entertaining fashion. Both former WWE stars were part of Furious 7 in the Fast and the Furious franchise with a loaded cast.

The Rock joined the franchise in Fast Five and has been an important part of the movies since then. Rousey was the new addition as she entered the acting industry shortly after her MMA career ended. The movie was a massive success as the franchise continued to thrive.

The film Rollerball was very much a product of the early 2000s. LL Cool J, Chris Klein, and Rebecca Romjin-Stamos starred in the movie based on an extreme sport with a darker backstory behind the scenes.

Both Shane McMahon and Paul Heyman had roles in Rollerball leading to WWE promoting it on television. Heyman played a commentator calling the games much like his WWE role at the time. Shane’s cameo only lasted a few seconds, but he was shown enough to provide an appearance for the wrestling fans.

MacGruber received its own movie on the big screen after finding success as a popular Saturday Night Live skit. There were quite a few appearances from multiple WWE stars in the film to give wrestling fans a reason to watch it.

Chris Jericho, MVP, Big Show, Kane, Mark Henry, and The Great Khali all had roles in the movie and were used in the promo photos. The era of Monday Night Raw celebrity guest hosts saw Will Forte appear in character on Raw to sell the movie.

Ed Leslie made a career out of being Hulk Hogan’s best friend with contracts in WWE and WCW based on it. Hogan was able to get Leslie even more opportunities outside of the wrestling business with one of his movies.

Santa with Muscles was one of the multiple movies meant to get momentum for Hogan’s career. Leslie was given a small role as a lab assistant solely due to Hulk’s influence and desire to help out his best friend again.

6 The Rock, Zelina Vega and Tessa Blanchard (Fighting with My Family)

The Rock took a big risk in developing a movie based on Paige’s life and family titled Fighting with My Family. Paige’s journey in the wrestling industry with her fascinating wrestling family and the move to WWE is the story, played out with some exaggerations.

Rock wanted to give some love to the wrestling industry by casting current WWE star Zelina Vega to play AJ Lee in the big match scene. Tessa Blanchard had a role as a stunt double for Florence Pugh, but she is clearly visible in the match. Rock even made an appearance in the movie to add some more star power.

Roman Reigns received his first relevant acting role in the Hobbs & Shaw movie during his time away from the ring. The film was made as a spin-off of the Fast and Furious franchise with The Rock and Jason Statham reprising their roles.

Rock and Roman’s real relation as cousins made the movie roles even more fascinating as they played siblings. The role of Reigns didn’t place him in many scenes, but it gave him a great introduction to the movie world if he ever wants to make that jump.

Adam Sandler often loves working with athletes in his movies. Wrestlers were a huge part of The Longest Yard remake with a star-studded cast of names like Sandler, Chris Rock, Bert Reynolds, and many others.

Steve Austin, Kevin Nash, Goldberg, and The Great Khali all had roles in the movie for the football game that takes place. Sandler loved the work of Austin enough to have him return for a new role in the Grown-Ups franchise.

3 Jim Ross and Jerry Lawler (Man on the Moon)

Jim Carrey pulled off one of his best acting performances playing the role of Andy Kaufman in Man on the Moon with the wrestling chapter of Kaufman’s career represented. The infamous feud with Jerry Lawler saw Lawler playing himself in the scenes.

Lawler’s WWE commentary partner Jim Ross received a role in the movie playing a commentator for the Kaufman vs Lawler scenes. Both talents referenced Carrey staying in character on set and frustrating them.

2 Batista and Rob Van Dam (Wrong Side of Town)

One of the funniest instances of multiple wrestlers appearing in the same movie saw Rob Van Dam and Batista appearing in the straight to DVD movie titled Wrong Side of Town. The director loved wrestling and cast them both along with other celebrities like Ja Rule and Omarion.

RVD was the star of the movie, but the movie poster and DVD cover art showed Batista with a bigger picture. Most people likely thought Batista was the star until realizing he was only in a handful of scenes.

1 The Rock and Great Khali (Get Smart)

Wrestling was represented in the 2008 summer blockbuster film Get Smart starring Steve Carell and Anne Hathaway. The Rock joined them as the third lead actor in one of his biggest acting roles at that point.

A bigger surprise saw The Great Khali making an appearance as well using his size for a few funny battles. WWE didn’t hype up Khali’s appearance much despite Get Smart being one of the biggest movies for an active talent on the roster.