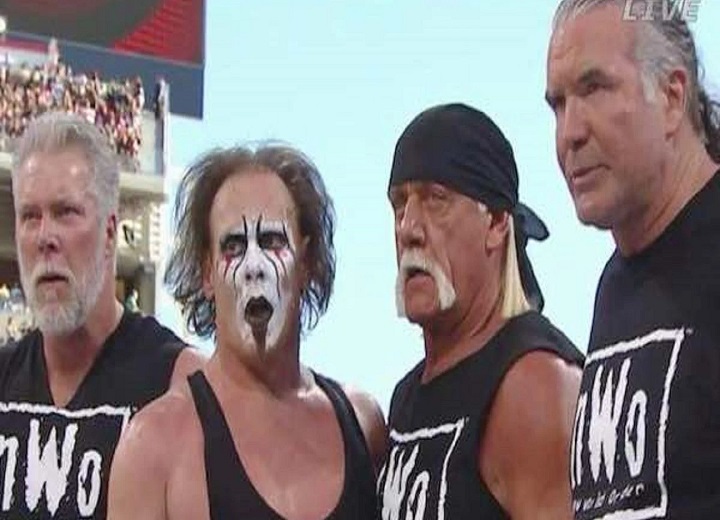 A lot of fans were puzzled at WrestleMania as to why Sting lost his first WWE match to Triple H. However what many fans were more puzzled by was the fact that the nWo, Sting’s biggest enemies during the time, helped him.

A lot of fans were puzzled at WrestleMania as to why Sting lost his first WWE match to Triple H.

However what many fans were more puzzled by was the fact that the nWo, Sting’s biggest enemies during the Monday Night Wars, helped Sting in his match with Triple H.

Fans may have gotten a fix of nostalgia, seeing nWo and DX in the same ring, but again it made no sense that Sting being a WCW guy through and through, was helped by a group whose purpose was to destroy WCW.

Were we supposed to be led to forget all that? Do we not remember what the story was during the war?

Would it have made sense for the Corporation to return and help Stone Cold if he was working a match at WrestleMania?

Either way, Scott Hall answered that question from a fan on Twitter, and gave just about the only logical reason any of us could guess.

However, many fans still didn’t like the idea that Triple H got over Sting:

Still don’t get why HHH went over at WM, well I mean I get it, but it was just stupid.. Where does that get HHH? It wouldn’t have mattered if he’d won or lost.. Now you have Sting, who obviously wants to work again, and likely his next match will be against Taker at WM next year.. Hopefully they’ll let Sting go over on someone beforehand, or it’ll be kinda stupid to have him face Taker knowing he’s gonna lose that match too.

Sting finally came to WWE back in 2014 and he was locked in a feud with Triple H that culminated in a match at Wrestlemania 31. Sting would end up losing the match and this decision was questioned by fans and met with criticism.

Sting took far too long to sign with WWE. When he did, he lost his only Wrestlemania match against Triple H in what was described as a mess of a match with DX and nWo getting involved in the fray.

According to Triple H, the match was booked in this way in order to set up another match in the future.

During the WWE Untold documentary about Sting, Triple H explained that he was actually going to face off against The Rock at WrestleMania 32.

Him beating Sting would get him over and he would prepare to face The Rock at the following year’s Wrestlemania. However, that did not end up happening due to The Rock’s Hollywood career.

“And then the next one he [Sting] threw out I think was me and so, at that point [it] was me going back to Vince and saying, ‘Do we wanna make this happen?’ And Vince was all for it and we were able to make a deal.

Part of the impetus with the way things turned out with the Sting thing is because I was already booked to work with The Rock at the following year’s WrestleMania and we’ll build it for more than a year. That was the intent, belief, everything else.

Just as time went on, Rock’s schedule changed later in the year and we weren’t able to do the match for the following year’s WrestleMania one-on-one against The Rock.”

“You know there are people who’ll say, ‘Well…’, I should’ve put him over to give him the moment and that’s arguably — to say that you should’ve…

The Rock situation made that impossible, which didn’t happen, but that’s the truth of it. Are there things that could’ve been done differently? I don’t know that it took away from anything.”

Due to the match no longer happening, Triple H’s match against Sting remains as the only time the two squared off in the ring and that will most likely never change.