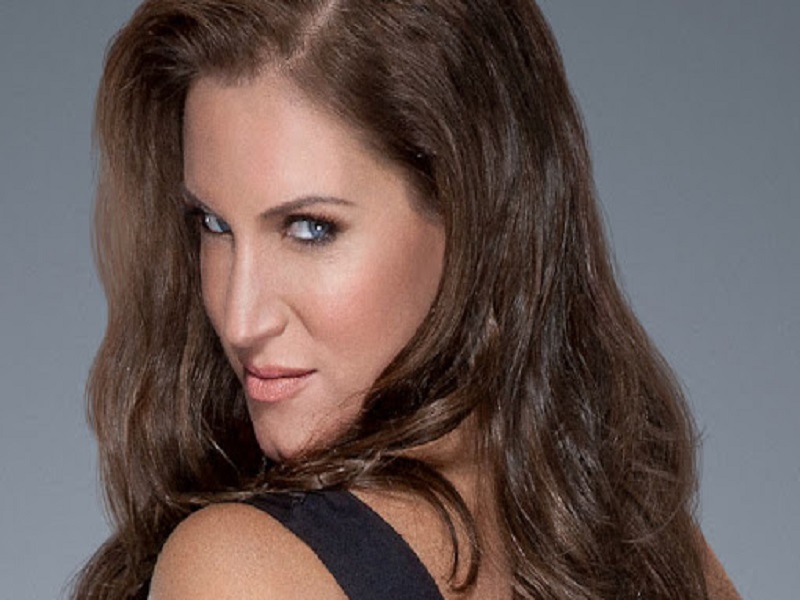 Stephanie McMahon is one of the top WWE women who has a very fine body shape and great boobs and she is not afraid to flaunt her boobs. below are 5 hot photos of the former WWE women champion showing her boobs.

After taking a brief sabbatical from television, Stephanie resurfaced in July 2001 with her tits appearing to have been surgically enlarged, whether by design or otherwise, put the rest of the women’s plastic in the shade. With speculation running rampant that she had her tits done, Stephanie confirmed during a radio interview that she had indeed gotten a breast augmentation.

While appearing on The Opie & Anthony Show on August 14, 2001, Stephanie revealed that she had her tits done a few weeks earlier, shortly before she became the owner of ECW in a storyline. She noted that her breasts had become swollen and was massaging them for medical purposes.

Stephanie said that she once saw a sign in the crowd that suggested her breasts sagged, which hurt her feelings. With the enlargement, her boobs didn’t sag anymore and she could finally look at herself in the mirror and be happy with her appearance. Stephanie also said her bra size was a D.

Later that year, Linda McMahon offered her thoughts on her daughter’s breast augmentation during an interview with Seth Mates of WWF.com. Mates asked Linda, “How did you feel when Stephanie came to you and said she wanted to “enhance” herself?”

“My first concerns are always with health issues,” Linda replied. “Stephanie had thoroughly investigated the procedure, and she had answers to all the questions that I asked, and so I felt comfortable that if that was something that she wanted to do, then she should proceed, and she had my full support.”

On April 30, 2015, Chris Jericho brought his uncensored podcast to the WWE Network with Stephanie as his guest. While looking back at some memorable moments they shared, Stephanie talked about her decision to get breast implants.

“I was reading all the Twitter comments about 10 questions you should ask me and all that kind of stuff and there were a lot of naysayers in terms of my breast enhancement surgery, or augmentation, whatever you want to say,” Stephanie said.

“But what had happened was, at one point in time I was heavier and then I had lost some weight and I didn’t like the way I looked and I wasn’t confident in how I looked. And so it was my own personal decision to have that done and I was proud of what I did.”

During the Attitude Era, Stephanie’s boob job was often ridiculed by Jericho and “The Most Electrifying Man in Sports Entertainment,” The Rock. It was first acknowledged on Raw Is War on August 13, 2001, with “Y2J” mocking the noticeable growth of her chest. Jericho had a video still shown on the Titantron of Stephanie earlier in the year next to a recent shot of her busting out of her top.

Stephanie, now folding her arms over her breasts, snapped back, “I don’t know what you’re talking about Jericho! You must have some kind of imagination!”

Jericho then said they should go out to dinner to discuss it since there’s a Hooters restaurant nearby. Rhyno, who was standing next to Stephanie, grabbed the mic and told Jericho to come to the ring so he could knock some respect into him.

A few minutes later, Stephanie challenged Jericho and The Rock (who had joined “Y2J” on stage) to put their money where their mouths are by facing Booker T and Rhyno that night in a tag team match. Jericho accepted the challenge and thanked Stephanie by saying she’s the breast … er … best. The Rock then promised to teach Booker T a lesson in geography. They’d go all around the world and use Stephanie’s breasts as a flotation device.

When the topic of her breast augmentation came up in a semi-joking way during a creative meeting, Stephanie said that she would be happy to go along with the angle if the writing staff felt it would elevate Jericho’s standing in the company (according to Wade Keller of the Pro Wrestling Torch).

“She’s a great sport,” one of her coworkers told Keller. The boob jokes continued during an in-ring confrontation with The Rock and Jericho on SmackDown! on October 18, 2001, as they took turns picking on her. Stephanie told The Rock that Jericho was jealous of him and couldn’t be trusted because he would screw him the first chance he got. The Rock said that if anyone knew anything about screwing, it was her.

Jericho said it surprised him that Stephanie wasn’t cheering for him because you can’t spell his name without using the letters “H” and “O.” The Rock said he wanted Stephanie’s support, and if he had as much support as her push-up bra gave to her “big phony funbags,” then he would be unstoppable.

Jericho said that speaking of Stephanie’s funbags, but she quickly cut him off. Stephanie then said that she hated them both before stomping into the locker room in tears. “Thanks for the mammaries!” Jericho said.