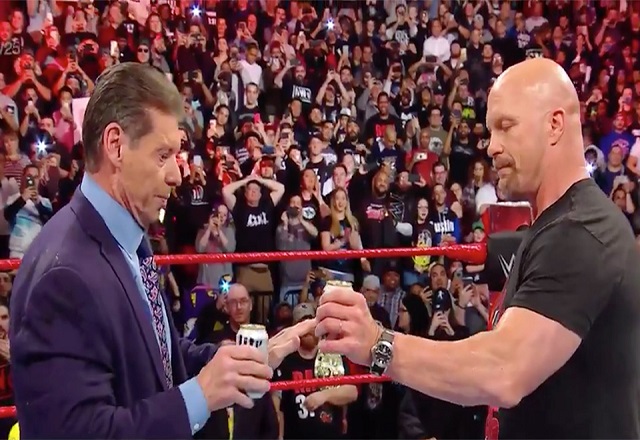 Stone Cold Steve Austin reveals what WWE Chairman Vince McMahon told him about all the wrestling companies he put under during his rise to the top.

The WWE is without a doubt the biggest wresling promotion in the world today. A young Vince McMahon took over from his father in 1982 and expended it nationally. In doing so, he drove several wrestling companies that stayed within their regional territories into extinction.

The company eventually became an international brand with no equal in the market. However, Vince does not believe it to be his doing. Instead, he thinks that wrestling promotions simply lacked the “foresight” to stay afloat, according to Stone Cold Steve Austin.

“Oh, I don’t know what kind of answer he gave me, it was so long ago,” Stone Cold told Wrestling Inc. “It was like when I used to ask him about putting all these guys out of business and he goes, ‘Steve, I didn’t put everybody out of business. They simply didn’t have the foresight or the vision-’ and he goes on and on and on.

“Vince is the master of the Jedi mind tricks. Vince is a super interesting guy, you should talk to him one of these days. I have so much respect and love for that guy, it’s unbelievable.”

The WWE finally have a rival in the market in the form on AEW. However, the young promotion is still a while away from dethroning WWE as the premier wrestling company in the world. At the moment however, they seem to be doing well for themselves. Only time will tell if they go head to head with the giants or will they go out the same way as the rivals prior have.