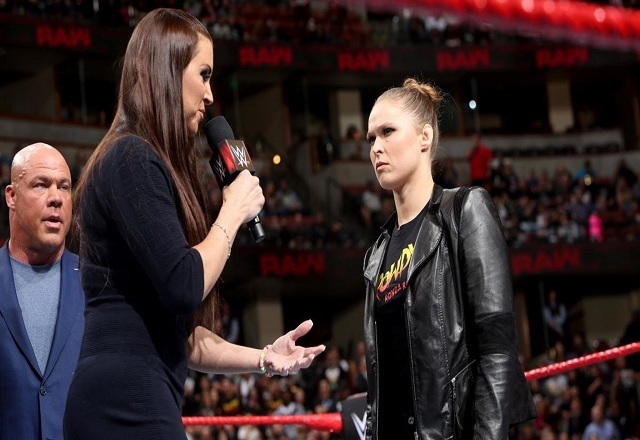 The Baddest Women on the Planet Ronda Rousey is one of the best female athletes in the world. Since her time in UFC, she has proven that she is the best in combat sports. She made her WWE debut in 2018 at the Royal Rumble. Since then she became one time RAW Women’s Champion before taking a hiatus from the company.

Ronda was one of the three women’s main event WrestleMania. She returned this year at Royal Rumble and won the complete match, punching her ticket to WrestleMania 38. Now, she has challenged Charlotte Flair for the SmackDown Women’s Championship at WrestleMania 38.

Recently, a journalist and Stand-Up Comedian Adam Glyn posted a video on his YouTube channel Adam’s Apple. He interviewed Stephanie McMahon for a short time, where he asked her about Ronda Rousey’s return.

Stephanie said, “Ronda wanted to have a baby obviously and we were very supportive of that and ofcourse the door was always open for her to come back. We were always hopeful she was coming. That was the plan, but plans change especially when you have kids, but here she is.”

WWE was always ready to sign Ronda back when she was ready to return. It is very good to see how WWE is supportive of their wrestlers. The company never comes between the personal decisions of their superstars and employees. This is one reason many pro-wrestlers want to have a WWE contract.

Apart from Ronda Rousey returning, Stephanie McMahon was also happy for all the participants in the Women’s Royal Rumble match. Many of the superstars in that match were mom’s and this year’s Rumble broke all the stereotypes of women superstars having kids. WWE is at the top of promoting the women’s wrestling revolution.