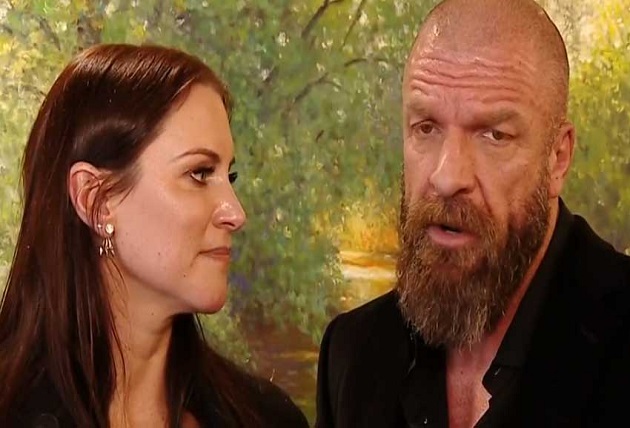 Amongst all the rivalries that Kurt Angle has had in his illustrious WWE career, his feud with Triple H would undoubtedly rank high along with the Olympic gold medalist’s best work.

Kurt Angle teamed up with Triple H and Stephanie McMahon for a tag match against The Dudley Boyz and Lita in 2000.

While Angle’s team won, most fans remember the bout for its post-match celebration, which saw Stephanie McMahon embrace Kurt Angle and wrap her legs around him.

It was a really difficult spot: Kurt Angle on the storyline with Triple H and Stephanie McMahon

Kurt Angle stated that Stephanie McMahon planned the post-match celebration spot, and the whole idea was to piss Triple H off.

Angle initially had a different plan in mind, but Stephanie McMahon knew they needed to do something massive to grab Triple H’s attention.

“I remember, you know, before the match, we were planning on what to do, and I didn’t know how we were going to celebrate. If we wanted to piss off Triple H, we had to do something that would be offensive towards him. So, I told her, ‘Why don’t we hug each other, fall down and roll around the mat, you know, just roll together while we were holding each other.”

Kurt Angle admitted that he was confused as he had no intentions of mixing wrestling with real-life relationships.

“And she was like, ‘No, pick me up and let me wrap my legs around you and celebrate. And I was like, ‘Oh, sh**, you know, this is Triple H’s fiance, wife, whatever she was at that particular time, but, you know, it was a bit, it was confusing for me because I didn’t want to get involved with somebody, you know, who obviously had a real boyfriend or husband in the business and to do this Angle was really new to me and different.”

Kurt Angle realized the pressure of being in a high-profile angle with Triple H and Stephanie McMahon, and the WWE Hall of Famer was careful not to rub anyone the wrong way.

“Oh yeah, without a doubt. I didn’t want to piss anyone off. It was a really difficult spot to be in.”

The storyline featuring Kurt Angle, Triple H, and Stephanie McMahon was still in the early stages back then, and as months passed, the feud became one of the top angles in WWE.

Kurt Angle and Conrad Thompson will cover the storyline in detail in next week’s podcast episode.

John Cena: “I made a mistake”

Is this marriage over? – Naomi feared not growing old together’