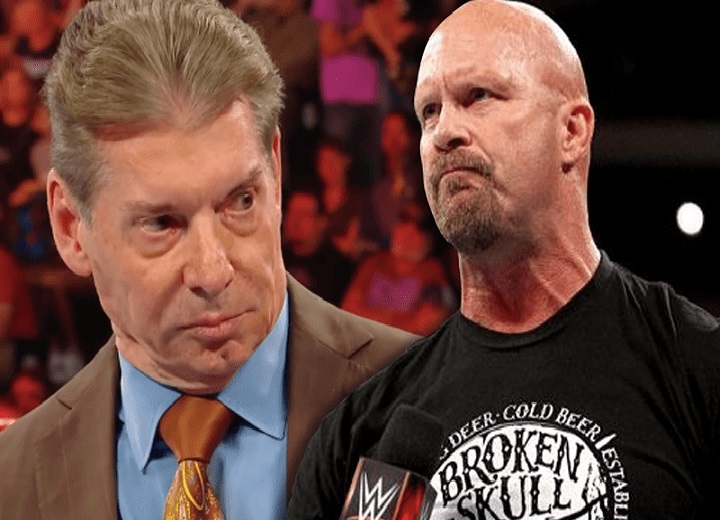 Steve Austin is a WWE Hall Of Famer and he achieved that legendary status by being himself. If The Rattlesnake wants to speak his mind it doesn’t matter who he needs to talk to, especially Vince McMahon.

But Austin and Vince didn’t always see eye to eye, and on a recent episode of Pardon My Take Austin recalled getting into an argument with Vince.

They have certainly had their occasions when they didn’t see eye to eye. The fact is if Austin says he’s not working with someone then it’s just not happening.

“We got along, for the most part, all the time. It’s funny. I tell people this that are still in the game. There was a day back when I was ‘the guy’ [where] if I called Vince, his phone didn’t ring one full time because I was ‘that guy’.

Hell, now it rings to voicemail, and I’m lucky if he calls me back.

“Every now and then we wouldn’t see eye-to-eye on certain things. I remember one specific time in Cleveland, Gund arena, they had me booked with someone that I already said, I would not work with this person.

And we were in a room, about the size of this one, and man, I let loose with some real colorful language, and I let everybody know exactly what I thought, because I told you, ‘Don’t put me in this situation, you did,’ I said, ‘Now I’m the f*cking bad guy.’

I said, ‘I told you not to do this to me.’ And it was much worse than that.

The WWE Hall of Famer did not reveal which wrestler he was talking about, but he did go on to talk more about why he didn’t want to put Brock Lesnar over on Raw.

So there’s been those times and the time they wanted me to fly to Atlanta for Monday Night Raw and put over Brock Lesnar. The night before I was working in Columbus, Georgia with Ric Flair in a cage so I was like a kid in the candy store working with the GOAT right.

Of course, I didn’t show up because it wasn’t time to do the favors yet for Brock in an unadvertised match in a tournament style TV match.”

“I love Brock Lesnar, and I’ll lose to him any day of the week but build it up so we can all make money of it and it’s gonna mean something.”

It’s unclear who Steve Austin was asked to work with, but he declined. We can only assume that he had very good reasons. If anything, he doesn’t really need to give much of an explanation because he’s Stone Cold.