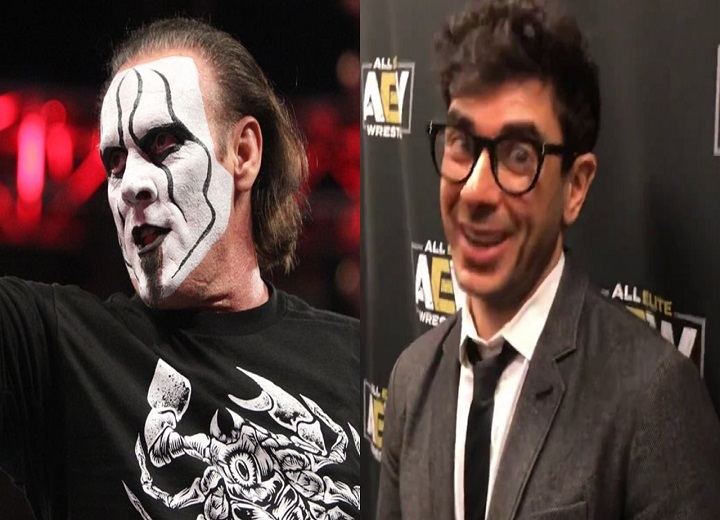 WWE Hall of Famer Sting has spoken about how he first met All Elite Wrestling (AEW) President and CEO Tony Khan and signed with the promotion.

When Sting made his debut a few weeks ago, it was confirmed that he had signed a full-time multi-year contract, but his role hasn’t actually been made clear yet.

Wrestling legend Sting rocked the wrestling world at AEW’s Winter is Coming special when he made his AEW debut. Sting appeared recently on the AEW Unrestricted podcast where he talked about his debut with Tony Schiavone and Aubrey Edwards, revealing that he knew Tony Khan long before AEW.

“Well, you know, it all started, actually, if we go way back, well, five years I got a call from Tony Khan five years ago or so, maybe even more,” said Sting. “And I didn’t know who he was. And he says, hey, you know, my name is Tony Khan, blah, blah, blah. He mentioned the Jacksonville Jaguars.

And I thought, who is it? So I did my research and found out there is a Tony Khan and a Shad Khan. I ended up calling him back and he wanted me to sign a baseball bat and he wanted to present it to the team at the time and all that.

That’s a whole nother side story that we’ll talk about another time. But anyway, so I met Tony long before AEW, long before any of that ever happened.

“But he called me again about, oh, maybe a year ago or so,” Sting continued. “He didn’t call me. He sent a text. And I’m still with WWE, so I gotta be careful how I handle all this kinda stuff.

And so, I just kept it superficial and that was that. And oh, man, I’d say two months ago or so, somewhere around there, I reached out and I said, hey, are you still willing to talk? And he said, ‘yeah.’ So here we are.”

AEW fans sure do seem to appreciate the Stinger, so The Chadster is glad he found a home there, even if it did cause me great mental distress to see AEW kill WWE in the ratings for a few weeks thanks to the Sting bump.

If you haven’t already, give Sting’s appearance on AEW Unrestricted a listen. In addition to all his thoughts on AEW that we’ll be mining for clickbait articles over the next few days, Sting also looks back at his career, getting into pro wrestling with The Ultimate Warrior, working with Ric Flair, going through the Monday Night Wars, losing WCW, joining TNA, and getting his WrestleMania moment in WWE.

Triple H tells a lie, says, He beat Sting At Wrestlemania match because of The Rock