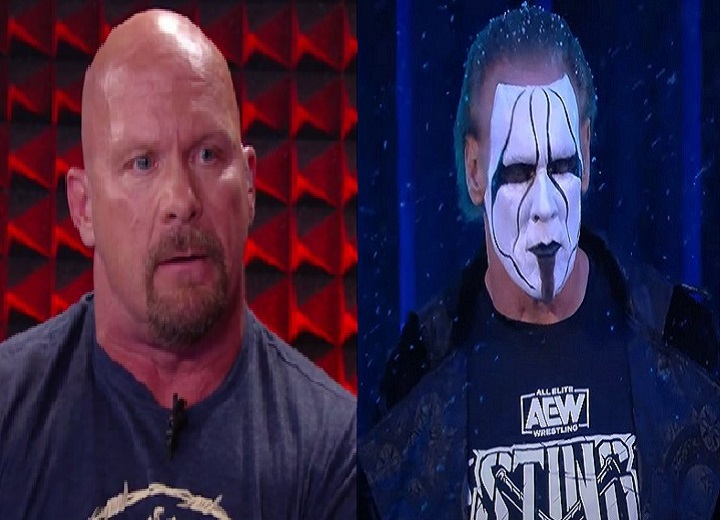 WWE Hall of Famer Sting recently took part in a Q&A session at the Wales Comic Con in Wrexham. “The Vigilante” is regarded as one of the greatest professional wrestlers of all time, having cultivated a legacy over a career spanning more than three decades.

Steve Borden, better known by the ring name Sting, is currently signed with All Elite Wrestling.

He discussed which RAW star he’d like to face inside the ring today, if he felt screwed by his WrestleMania match against Triple H, wanting to face The Undertaker, and more. Here are the highlights:

It has been reported that you held off getting neck surgery in order to have one more match. What is the story?

I don’t have any side effects? I can still work out and it doesn’t bother me, I don’t get a sore neck from sleeping or anything so why would I get surgery? If you don’t need it, don’t do it.”

If you were going to return to WWE, which persona would you be?

“I can’t pull off Surfer Sting anymore as I don’t have enough hair on my head. Probably Crow Sting or Joker Sting.”

What is your favorite incarnation of Sting?

If WWE asked you to work a program with a young up and coming talent who would you pick?

“Bray Wyatt, I like him. I know he’s not young but he has character, it’s kinda old school and I like that.”

How does it feel being a WWE Hall of Famer?

“It’s amazing! I never thought it would happen, when it did it was a great night. I am very glad to call myself a Hall of Famer.”

What is your personal take on the way your WrestleMania match with HHH was booked? Many believe you were screwed, were you?

“No. I have no complaints. It was WrestleMania. You had DX, you had the NWO. It was surreal. A great moment and great memories. No complaints from me.”

Why didn’t you get a return match with HHH?

How much creative control did you have? Is there anything that you have had to do that you didn’t want to do and / or anything you wanted to do but never got chance to?

“I’m sure that there is plenty that I wanted to do like the Taker match for example. As for things that I didn’t want to do – I just didn’t do them.

If I didn’t wanna do something I would find an alternative, better thing to do.”

What were the plans for you after your title match with Seth Rollins?

“I don’t know, I don’t think they really had any plans to be honest. I had my plans, I wanted that match with Taker and would have done my best to make it happen.”

Would you have wrestled without the makeup had WWE asked?

He is regarded as one of the greatest professional wrestlers of all time, having cultivated a legacy over a career spanning more than three decades.