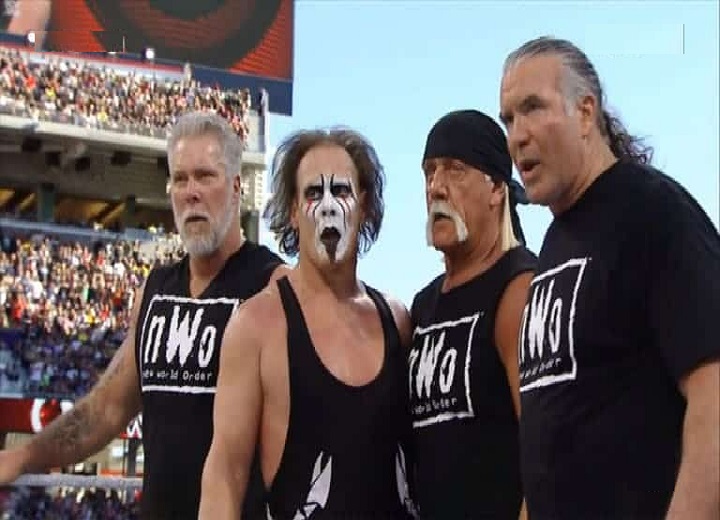 Sting’s career has taken some really strange turns, each of which ended up being for the better. Without the development of his character, we would not have the Sting we know and love today.

However, it was a rivalry that began in 1996 that completely transformed him from the People’s Champion to a dark vigilante. His rivalry with the New World Order is best described in one word: epic.

How did Sting begin feuding with the nWo?

In 1996, Sting began making some changes to his appearance and his attire. He grew out his hair and dyed it black.

A multi-coloured scorpion became a trademark symbol on his wrestling tights. Being the most popular babyface in WCW, Sting was teaming with former WWF superstar Lex Luger, who was a full-blown heel by then.

When Kevin Nash and Scott Hall, aka., the Outsiders came to WCW, Sting and Luger were amongst the first to stand up to them. This led to a match between Sting, Randy Savage, and Lex Luger against Hall, Nash and a mystery partner. The mystery partner turned out to be Hulk Hogan who turned heel to side with the nWo.

At Fall Brawl 1996, Sting and Luger teamed up with Ric Flair and Arn Anderson to take on the nWo inside War Games. The nWo had a nasty trick up their sleeve and aired doctored footage of Lex Luger being attacked by Sting in a parking lot. This convinced fans that Sting had sided with the enemy and caused his teammates to lose faith in him.

When Sting returned at Fall Brawl, he single-handedly changed the complexion of the match. After destroying the nWo, he turned to Lex Luger and asked him if he still believed whether he attacked him.

It is also important to note that the nWo had an imposter Sting wrestle for them. Luger said he still did not believe him which led to Sting flipping him off and walking out on his team.

The following episode of Nitro, Sting walked out and burst into a furious tirade. He targeted his fans, the commentators, WCW management and his Fall Brawl teammates for doubting him. His outburst would become the trigger for his character change and the look that is now associated with Sting.

“So for all of those fans out there and those wrestlers and people that never doubted the Stinger – I’ll stand by YOU if you stand by ME! But… but for all of the people, all of the commentators, all of the wrestlers, and all of the best friends who did doubt me, you can STICK IT! From now on, I consider myself a free agent… But that doesn’t mean that you won’t see the Stinger, from time to time I’m gonna pop-in when you the least expect it.”

Return of the Vigilante

The Icon stuck to his word and returned when fans least expected it. When he walked out, fans were in utter disbelief to see Sting dressed like the Crow, a superhero from the 1994 blockbuster movie of the same name.

The Crow was also a vigilante which automatically led to the comparisons with the vigilante. He confronted the nWo but did not attack them. They offered Sting a place in the faction which he turned down.

The vigilante started performing loyalty tests on wrestlers from WCW. He would save any wrestler who passed the test. The test involved dropping in unannounced and offering a wrestler the opportunity to strike him with his baseball bat. This is how the bat became an integral part of his attire. It was at this point that Sting started targeting members of the nWo.

Sting’s rivalry with Hollywood Hogan became the climax of the magnificent rivalry between the two forces. Hogan lost the WCW Heavyweight Championship to Sting at Starrcade 1997 in a highly controversial match while the rematch on WCW Nitro ended up in a no contest.

Post that, the title was vacated which led to a turning point in the fate of Sting and the entire nWo.
End of the nWo

The iconic faction split into two groups in 1998. Hogan led a group called nWo Hollywood while Hall and Nash led the nWo Wolfpac.

Both teams tried to get the vigilante to join their faction, but only one team succeeded. While making fans believe he sided with his bitterest rival Hogan, he ripped out the nWo Hollywood shirt to reveal the nWo Wolfpac’s red shirt.

The rivalry between nWo and the Icon faded away with time. WCW’s most iconic faction became redundant until WWE signed them in 2002.

Meanwhile, the franchise player continued to keep WCW afloat even though WWE began dominating the ratings war. Irrespective of the way it ended, Sting vs the nWo remains one of the most iconic rivalries to date.

Sting vs The nWo: The Rivalry That Changed Sting Forever