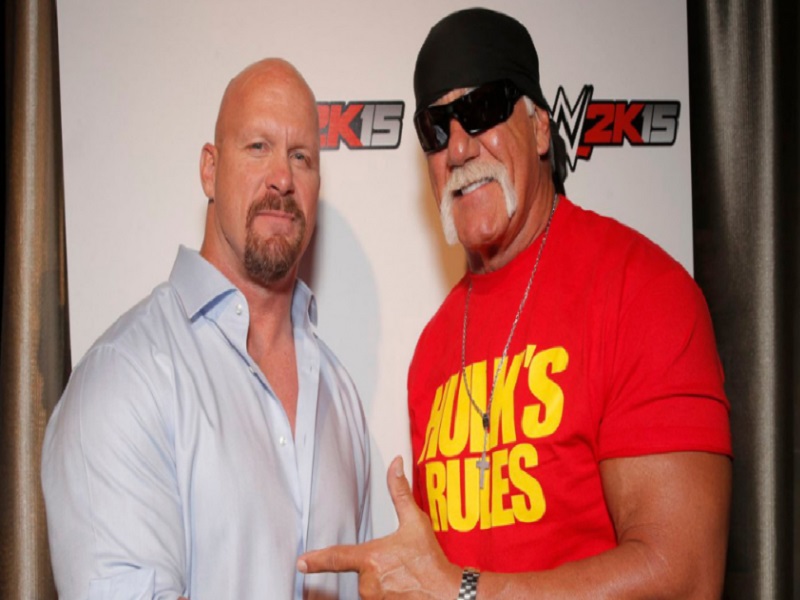 Along with The Rock and Ric Flair, Austin and Hogan are the two biggest names the business has ever seen, perhaps the very top two. In 2001, WWE finally bought WCW and ended the Monday Night Wars and by early 2022, the NWO – Hogan, Scott Hall and Kevin Nash – finally returned to WWE.

Hogan would have an all-time classic with The Rock at WrestleMania 18 that year, but Austin had a forgettable encounter with Hall. Bruce Pritchard has previously said on his podcast that WWE thought they’d have the chance to make Austin and Hogan down the road and that’s why they booked Rock and Hogan first.

What they didn’t anticipate was that Austin was out of the company a few short months after WrestleMania 18 and he’d only return for a swansong run leading up to WrestleMania 19 the next year where he completed his trilogy with The Rock. From Hogan’s point of view, he believes Austin and Rock were a little put out when the NWO arrived in WWE and challenged their top spot.

“Was there some legitimate heat [between Austin and I]? There was. “When me and Scott Hall and big Kev’ [Nash] came into the WWE with the NWO, we had such an edge, and we were getting cheered. I guess the babyfaces [Austin and The Rock] weren’t used to it. “[They] were complaining, ‘Those guys are turning us upside down, and we’re getting booed instead of cheered…’ So there was some legitimate heat there, you know, on a business level.

“I never got to work with him, but Stone Cold always said, ‘If there’s money to be made – let’s make it.’” Hogan went on to say that there was some awkwardness with Stone Cold stemming from a Hall of Fame ceremony where Hogan and Bret Hart had a misunderstanding and Austin firmly took Hart’s side.

Legendary announcer and longtime close friend of Austin, Jim Ross, says the Texas Rattlesnake didn’t like the matchup from a stylistic point of view. “Austin had it in his mind that Hogan’s style and Austin’s style were oil and water. He just didn’t feel the chemistry. Austin was never about having good matches. “Austin was about having great matches. He knew better than anybody else in the world who he could work the best with. Hogan wasn’t on that list. “Steve could be wrong too. I’m not saying that Hogan and Austin couldn’t have a good match. Look at the match Hogan had at WrestleMania 18 with the Rock.

“Steve is a stubborn guy and he just didn’t feel it. That’s what we are trying to explain in meeting with these guys is that there is a new sheriff and town and his name is Stone Cold. “It is not Hulkamania anymore. But if we could use Hulkamania in a bitter way, in an angry way, maybe we could get a WrestleMania out of it. “That was the idea but it never came to fruition. It didn’t happen because Steve didn’t push for it. I believe Hogan probably would have gone along with it because it would have been a great payday and he could have worked with Austin,” said JR.

Austin teased a match with Hogan during the Hall of Fame 2006, but he had already been retired three years at this point and never did come out of it. “I wanted to have that match [with Austin],” said Hogan, speaking of Austin comments. “That was the one match I never had. I want to do good business, help the sport and give the fans what they want—and working with Steve would [have done] all three.

“I’ve got no idea why Steve didn’t want to have a match at WrestleMania. I don’t know if he has a problem with me personally. “When we were in WCW, and he was Stunning Steve Austin, he talked to me a couple of times about different ideas he had to work with me. The ideas were okay, they weren’t home runs, but they were pretty good. “I always put over anybody they asked me to put over. I think most of my WCW run was doing jobs. “I wish I could’ve put over Steve Austin…” Austin admitted to turning matches down with Hogan in 2002, 2004 and 2005 and much like JR said, the box office legend suggested it wouldn’t have been a good watch in the ring.

”I gotta say, Hulk Hogan, because one of the biggest draws in the history of the business. Everybody thought that match between ‘Stone Cold’ Steve Austin and Hulk Hogan should have happened a couple of years back, and it never did. Just for whatever reason, I didn’t feel like stepping back in the ring. “It sounds like a good match on paper, but I didn’t think it would look so good once you got into the ring. I think Hogan was ready to go, but I wasn’t. And so, I never got a chance to wrestle that guy, and it would’ve been fun to be in the ring with him.”