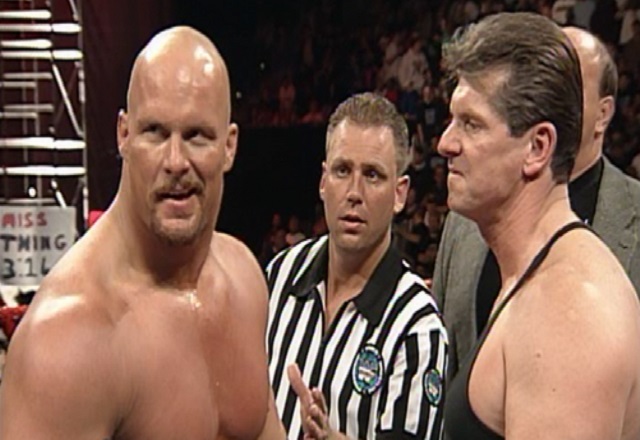 The Texas Rattlesnake hasn’t wrestled for almost two decades since he faced The Rock in his final match at WrestleMania 19 back in 2003. Austin, now 57, retired as his body began to break down and has resisted dozens of attempts to bring him back over the years.

However, with WrestleMania 38 taking place in Dallas, Texas – Austin’s home state – Fightful are reporting that WWE has made ‘significant overtures’ to Austin about making an in-ring return. Fightful say they reached out to WWE in an ‘official capacity’ but haven’t been given any concrete information.

Those figures Fightful have asked within WWE have had a range of responses, from being coy, to saying they assume it will happen. It’s believed that, at the very, least Austin is expected for a physical role.

A potential opponent for Steve Austin hasn’t been spoken about, or if any real progress has been made. But Kevin Owens, who uses the Stone Cold Stunner as his finisher these days, did trash talk Texas on RAW this week and it’s speculated that he could get the matchup. Austin was biggest star of wrestling’s greatest era.

The six-time WWE champion spearheaded the biggest ratings WWE ever saw in the late 1990s and early 2000s and main-evented the biggest attendances WWE has ever garnered. The money he made from headlining pay-per-views, selling out shows and from his merchandise has never been topped.

Austin headlined three WrestleManias with The Rock in one of the most iconic rivalries in the history of professional wrestling, but Austin has never felt the need to return before, so it’s interesting that these talks appear to be ongoing and he hasn’t outright rejected the ideas.

Austin said just last year with Chris Jericho that one of the reasons he never came back was because it was so difficult for him to leave it.

He admitted: “I think Vince [McMahon] tried talking me to coming back a couple times, but you know Chris, I love the business so much, I love it more than anybody else. I can only speak for myself, but I love the damn business, and it hurt me so much to leave it.

“And to me, going back for one match, man, why? What am I proving? What are they going to remember? It ain’t about the money. It took me a long time, damn near three years to get over the fact that I left the business.”