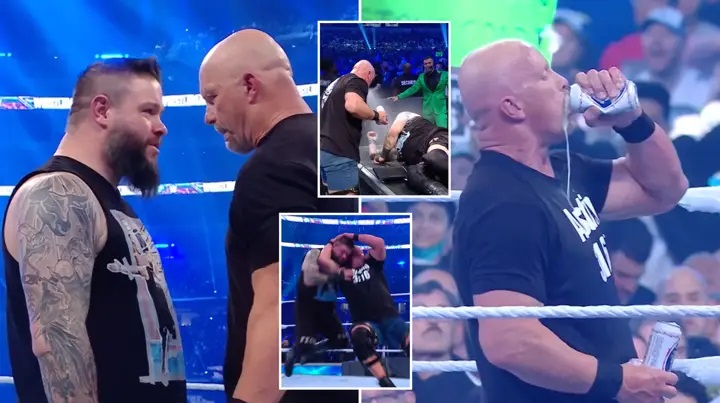 Stone Cold Steve Austin made his long-awaited comeback at WrestleMania 38 – and it was everything we thought it’d be, plus more. 19 years after retiring, the WWE Hall of Famer finally got the proper send off he deserves, signing off with an incredible victory over Kevin Owens.

Appearing on Owens’ ‘The KO Show’, Stone Cold’s biblical second coming was met with a wild reaction from fans inside Dallas’ AT&T Stadium as he was challenged to a No Holds Barred match. He promised to deliver “one last can of whoop ass” and, well, he certainly didn’t disappoint. When his iconic music played, a chorus of cheers rang out around AT&T Stadium as fans went into complete and utter meltdown.

But Stone Cold well and truly turned up the heat when he disappeared off stage for a split second, only to return riding an ATV quad bike. After circling the ring a few times, Stone Cold eventually made his way into the ring, kicking down the ‘KO Show’ signage on his way. When Stone Cold finally sat down, Owens started immediately slating his home state of Texas, taking particular aim at the locals by calling them “stupid”.

This didn’t sit well with the hometown hero, who replied: “In about 5 minutes, you’re going to have 75,000 people calling you an a**hole.” And he wasn’t wrong as chants instantly started ringing around the arena. Owens then directly challenged the WWE Hall of Famer to a No Holds Barred bout, which Austin duly obliged to partake in.

Even with both knees heavily strapped, Austin looked like a man reborn.It was a back-and-forth clash with chairs, tables, barricades and announcer’s desks all being utilised. The pair even ended up amongst the crowd at one point with Owens suplexing Austin into the hard concrete.

Throughout the entire match, Austin continued to drink on the job, even splitting his ice cold beer in Owen’s face while he was lying on the announcer’s table. Clearly struggling to contain the Texas Rattle Snake, Owens made a desperate attempt to escape by mounting Austin’s quad bike – but Stone Cold was hot on his heels.

The duo ended up driving up the ramp where Austin handed out a serving in front of the passionate, partisan crowd in his home state. It looked like Owens was going to mount a late comeback and upset the odds, but Austin produced a Stone Cold Stunner to finish the match and get his hand raised.

And in typical fashion, the great man himself celebrated by chugging beer after beer while Owens lay motionless on the canvas. 19 years after officially retiring, the final chapter has been inked and Stone Cold gets the sending off he deserves.