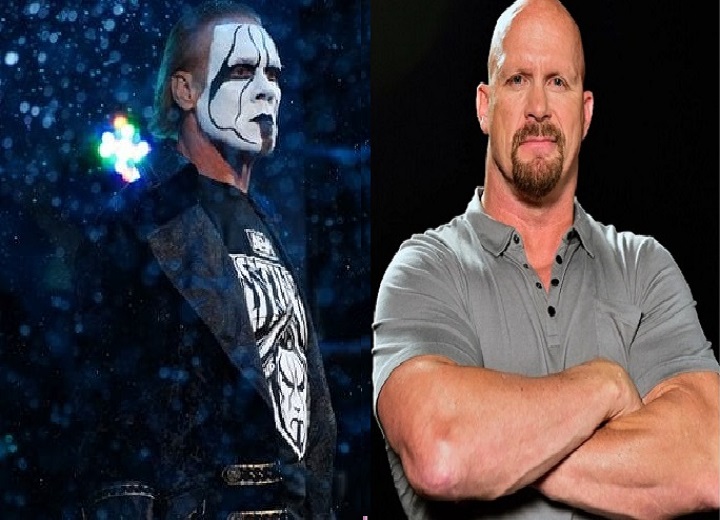 I love it when Hall of Famers complain about Creative decisions and fantasy book. WWE Legends – they’re just like us!

Steve Austin says isn’t comfortable with the fact that Triple H defeated Sting at the 2015 edition of WrestleMania in California. “If you’re going to bring Sting in, put him over,” Austin added.

Their 30 minute conversation covered a range of topics, but, in light of Sting’s recent return to WWE television and the match with Seth Rollins – one that focused heavily on his only other match in the company, a loss to Triple H at the 2015 edition of WrestleMania in California – it’s the pair’s discussion of how Stinger’s been used during his work for Vince McMahon that’s most relevant.

Unfortunately, this was taped before last night’s Raw, so if you’re looking outrage on that, check with my partner in crime and Sting mega-fan Geno (here, or here), but neither man was good with Hunter’s win in Levi’s Stadium this Spring.

While I wasn’t blown away by Ric’s pick to face The Icon last March, Kane, at least it would have made sense toward getting a showdown with The Undertaker at some point.

With that match off the table, probably for good, I am on board with Naitch’s choice to face Sting in Arlington, Texas in 2016:

Now that I’ve seen this other kid, Kevin Owens, Kevin Owens who was a legitimate heel would have been a great opponent for [Sting] in Dallas if WWE Creative had pitched the match. Owens had enough steam on him then and he actually was a heel.

I don’t know what the story would have been, but I’m confident that one of the best babyfaces of all-time and the best bad guy working today could come up with something.