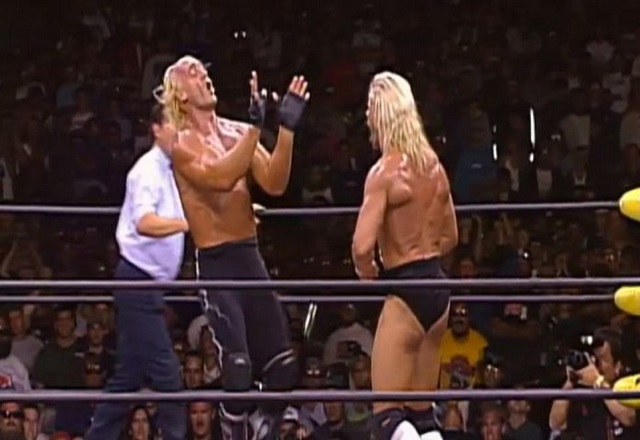 The nWo ran roughshod over WCW from their inception right through to the dying days of the company. This wasn’t necessarily a bad thing, they were easily WCW’s hottest act and one of the hottest things in the entire pro wrestling world at the time.

For nearly 5 years the nWo dominated the entire show with very little reprieve. Sting famously (or infamously) beat Hulk Hogan at Starrcade 97, finally taking the title off the nWo’s leader in a storyline that was built up for over a year.

Many forget however that Sting wasn’t the first person to end Hulk Hogan’s dominance. In fact, Lex Luger beat Hogan 4 months prior to Starrcade 97 and won the WCW World Heavyweight Championship to give WCW one of its few victories over the invading nWo.

On this night, Hogan was the perfect old school heel and the crowd was literally throwing garbage at him during his entrance, while Lex Luger was perhaps the most over he ever had been as a babyface. Watching it back, it is not a technical masterpiece, but it is exactly the kind of match it needed to be. The crowd was into every single thing Luger and Hogan did and even the inevitable nWo interference didn’t deter from the match as they usually did.

The match ran for 13 minutes before the nWo started running down, but Luger managed to fight them all off. Then Luger would hit his trademark forearm and then got Hogan up into the Torture Rack. The referee absolutely loses his mind when he realizes Hulk Hogan has given up and calls for the bell. Lex Luger had dethroned Hulk Hogan to become WCW World Heavyweight Champion!

After the match, the WCW locker room ran down to celebrate with Luger, lifting him up on their shoulders. Luger shakes everybody’s hands as the commentary is elated, WCW had finally done it, they had beaten the nWo! Luger and the rest of the roster wipe the nWo spray-paint off of the Big Gold Belt and Luger gets doused with champagne, giving the fans a rare happy ending to Nitro after a year of nWo dominance.