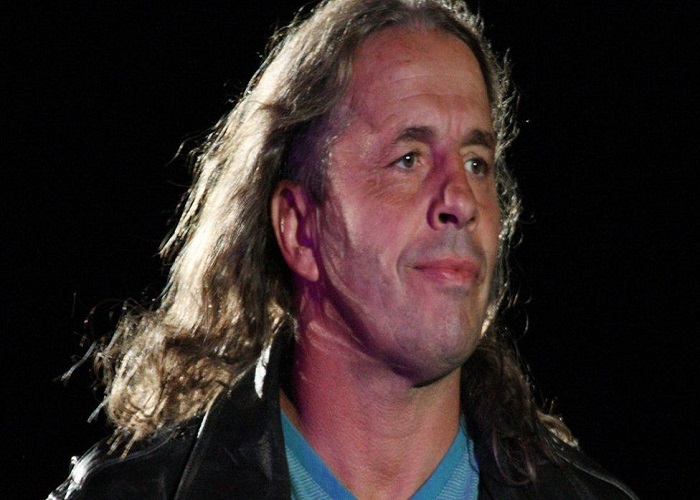 Near the height of his popularity, Bret ‘The Hitman’ Hart appeared on The Dini Petty Show in 1993. The interview was essentially a fluff piece used to promote the upcoming Survivor Series PPV. If you’re looking for an in-depth character exploration of Bret, you can skip the clip.

There was one fascinating element to the talk show, however. During the audience Q & A segment, two aspiring wrestlers asked Bret Hart for career advice. One of those young up-and-comers was Adam Copeland, otherwise known as Edge.

A baby-faced Edge and his friend (John E. Legend) asked Bret Hart for advice on when and how to approach companies like the WWF and WCW. Hart said the aspiring wrestlers should get as many matches as they can to get on television as much as possible (well, duh!). Edge told his fellow Canadian, The Hitman, “We’ve been on TV out here,” in response to Bret’s unhelpful answer. With charm and a million-dollar smile, he plugged the gym that he worked at invited Bret to come to see his work.

Petty tried to help the aspiring wrestlers, “So, if you want to go to the WWF, do you go to an audition? How does it work?” Hart responded by saying, “You have to get experience, which is hard to get nowadays. And then they can get you on television, and they can get you a tryout.”

The obvious answer didn’t appear to satisfy Edge, Legend, or Petty. Hart continued, “I’m not really the best person to ask this question.” The camera cut back to an amusing and slightly heartbreaking shot of the two dissatisfied, hungry wrestlers. They wore stone faces and had their arms crossed.

It’s hard to imagine Edge being completely satisfied by Bret Hart’s answers to him and his friend on the Dini Petty show. However, Edge would get something even better a few years later with time and persistence.

As Hart had alluded to, Edge did get a couple of tryout matches for WCW in 1996. He wrestled as Damon Striker on WCW Pro, and his work caught the eye of Carl DeMarco. DeMarco was the president of WWE’s Canadian Operations. He also happened to be Bret Hart’s business manager.