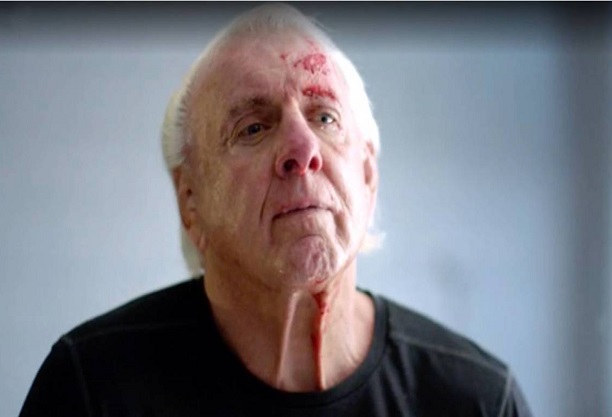 Earlier this month on WWE NXT, Ric Flair was in the ring at Full Sail University, and the crowd was eating his act up.

That should come as no surprise—Flair has been one of professional wrestling’s most popular and enduring acts, hitting his peak in the late 1980s and never looking back.

For once he’s not selling himself, though those days aren’t gone either. Instead, his daughter Ashley, wrestling as “Charlotte” for the WWE’s developmental system, is making her television debut.

Although the high-definition television isn’t kind to his 64-year-old face, complete with phony tan, 40 years of scars and dyed, thinning hair, you’d never guess watching that Flair’s life, once again, is embroiled in turmoil.

Maybe if you’ve spent the last two decades fending off one crisis or another, you become bulletproof? Maybe Flair, after all that has happened, is invulnerable to the slings and arrows of life?

In the ring, he talks about the business he loves. And while wrestling has been kind to him in many ways, it’s also cost him everything he’s ever had.

For 25 years, Flair has been on a steady decline, the ground under his feet increasingly treacherous with each and every year. Along the way, there have also been the highest of highs, but Flair is never content to quit while he’s ahead.

A life of domestic tranquility, of regular paychecks, of work and responsibility isn’t part of the Ric Flair gimmick. And the gimmick is all Flair has left. That and the memories.

There have been several great articles about Flair’s decline. But, with respect, they’re all missing the point. The divorces, lawsuits and assorted legal battles are not the story. They are the detritus in Flair’s wake.

The real battles were in the ring. Wrestling is Flair’s life. It has been and will be until the day he dies. Everything else is just the unwanted details of a lifestyle that is as much wrestling gimmick as it is, well, a life.

“For me, it’s about camaraderie,” Flair told ESPN’s Elizabeth Merrill. “My whole life is like, if something’s going on, nothing ever preceded fun. I always put my friends and the fun and the business ahead of everything.”

Owen Hart’s Hall of Fame Induction: Martha Hart Finally Opens Up On what will happen

Why Charlotte Flair Went Under the Knife For WWE – Check