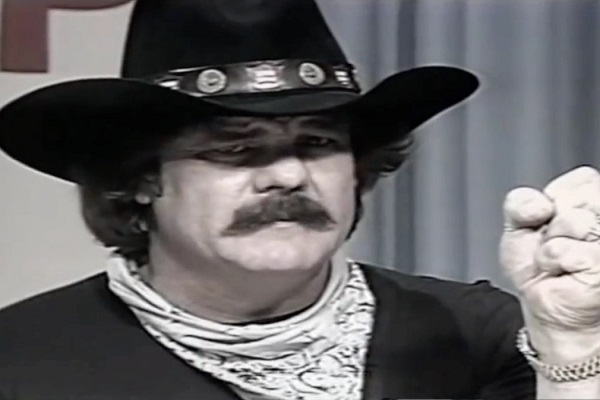 Blackjack Mulligan was a West Texas roughneck who was known to take no nonsense from anybody. He even once stood his ground against Andre the Giant and Ole Anderson! But on one fateful night in Boston, Massachusetts in 1971, he wasn’t able to protect himself.

Being one of the top heels in the business back when kayfabe was well and truly protected came with its own set of risks and dangers — not from his opponents in the ring, but from the fans. In this one particular instance, a bloodbath ensued!

Born in Sweetwater, Texas, Blackjack Mulligan’s imposing physical stature–6-feet, 8-inches tall, 320 pounds–made him an intimidating figure inside the ring, and he was tough enough outside of it to be one of the top heels in wrestling.

Until he met Pedro Morales for the WWWF (now WWE) world championship on May 15, 1971, in Boston, Massachusetts.

Morales was a fiery babyface, and his Latin fanbase at the time was so rabid in its support that heels were getting too much heat. That night in the old Boston Garden, a fan jumped Mulligan as he was heading for the ring. The result? A bloodbath.

Here’s how the Boston Globe revisited the story back in 2005:

“A male spectator wielding a knife hopped the guardrail as Mulligan climbed into the ring. The fan stabbed Mulligan in the thigh, opening gushing wounds.

The crowd, many of whom initially froze, realized the episode wasn’t part of the show when Gorilla Monsoon, a wrestler then known as a “good guy,” raced to attend to Mulligan, who, according to wrestling logic, he should have hated.

Towels on Mulligan’s wounds quickly reddened as he was carried from the ring to receive 100 stitches at the hospital.”

A bloodbath ensued after a Boston fan entered the ring and stabbed Blackjack Mulligan with a knife dipped in pig fat.

Sheldon Goldberg, a fan in attendance that night who would go on to own New England Championship Wrestling, told the Globe that Mulligan’s heat that night was off the charts. But that was nothing unusual for a Pedro Morales match.

“People really lived or died with Morales,” Goldberg said. “The people were so demonstrative in their affection for him. They would go crazy, and they hated Blackjack Mulligan.”

Mulligan told Mid-Atlantic Gateway that he and his manager were white-hot all around the territory. The angry crowd in Boston wasn’t exactly unexpected.

“We were just major hot,” Mulligan said. “It was the first time that Ernie Roth had managed anybody other than the Sheik.

They put Ernie and me together, and we were the magic combo. This little goofy looking guy Ernie Roth, together with a big ol’ cowboy! We sold out everywhere.”

But this went beyond heat. The attacker caught the big cowboy in the leg and arm with a stiletto-type knife. In the aftermath, Mulligan–who was only into his fourth year as a pro wrestler–lay on the mat, blood pooling from stab wounds to his leg and arm. Special referee Gorilla Monsoon rushed to help the downed grappler.

“Boston was a violent town,” Bobby Heenan wrote in his book, Bobby The Brain: Wrestling’s Bad Boy Tells All. “… mind you, if you take Gorilla’s glasses off, he can’t see how many people are in a room.

A fan jumped into the ring with a stiletto and stabbed Mulligan up the leg. Mulligan reached out for the guy but got cut up the arm. Monsoon, blind as a bat, grabbed the guy and threw him out of the ring without knowing that the guy cut anybody.”

But the news got worse from there. Not only had the culprit slashed Mulligan, but the attacker had also taken extra steps to make sure the damage from the injuries would be as nasty as possible.

“We took Mulligan to the hospital to get sewn up, but his cut became infected,” Heenan wrote. “The ‘fan’ had dipped his knife in pig fat. It took 100 stitches to close up that leg.”

Not to dispute Heenan’s account–he wasn’t in the territory at the time–but it was reportedly territory star Bulldog Brower who actually got Mulligan the medical aid he needed.
“It took 100 stitches to close up Blackjack Mulligan’s leg.”

From the blog Ring the Damn Bell:

“Fellow wrestler ‘Bulldog’ Brower took Mulligan to his hotel room to bandage him up. Mulligan recalled, Brower taking out his pistol ready to shoot at angry fans who were gathering at the hotel still thirsty for blood.

Brower managed to sneak Mulligan out of the hotel and drove all the way to New Jersey where at this point, Mulligan’s wounds had become infected and was in dire condition.

Thankfully, the doctors were able to clear out the infections and sealed up his wounds. Mulligan would recover and continue his feud with Morales across the eastern seaboard.”

Mulligan’s attacker was never caught, but the stabbing resulted in new security measures at the Boston Garden, with attendees–even children–being patted down before they were allowed into the building. It didn’t matter. The Boston fans were still wild about wrestling.

“The Boston fans would throw frozen hardboiled eggs in the ring,” Heenan wrote. “They could pick you off at 500 yards. The management put a plastic shield around the ring. The fans got more creative, with one of them throwing a trumpet in the ring. They put a screen net over the ring, but no one could outsmart the Boston fans. They started throwing big, 20-penny nails.”

Mulligan, for his part, was fairly stoic about the event.

“When the guy got me with the knife in Boston Garden, in 1970 or ’71, somewhere in there, that kind of shut me down for that period,” Mulligan said. “But I went on rehab, and did well with that.”

Mulligan would go on to star in territories from the AWA to Georgia, Florida, and Mid-Atlantic. For a time, he owned Southeastern Championship Wrestling in Knoxville along with Ric Flair. Mulligan passed away in April 2016, at age 73.

Video: Paige Dances CRAZILY As If No One Is Watching Her