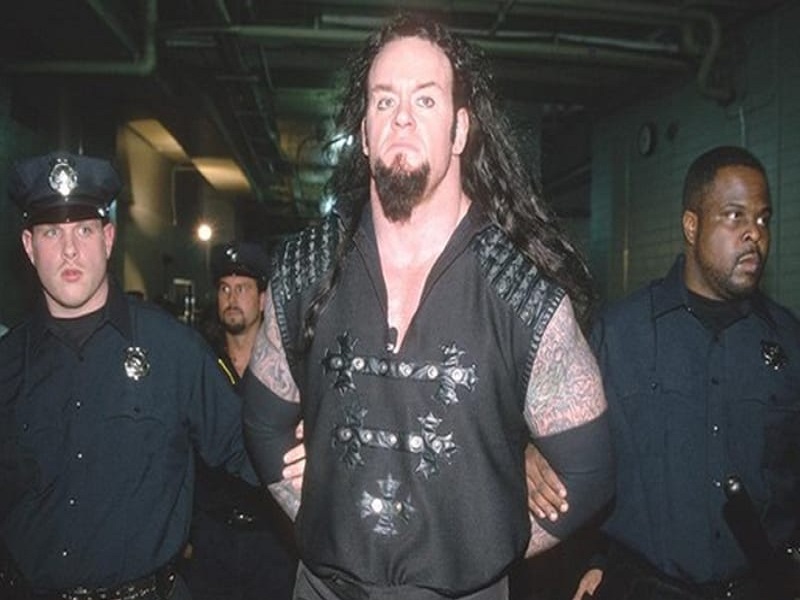 During a recent interview on Smack Talk, legendary Old School Manager Dutch Mantell (aka Zeb Colter) talked about being The Undertaker’s manager (when he was The Master Of Pain before joining the WWF).

Mantell recalled a crazy story of The Deadman being handcuffed at gunpoint by Police:

“We were coming back, we’d wrestled in Louisville, Kentucky. We were driving back to Nashville, it’s about 160 miles, and we were driving down the road, we had another guy in the car with us.

All of a sudden, we were almost to the Tennessee line and the lights come on…Kentucky trooper pulled us over. Taker was driving, I said, ‘Are you speeding?’, and he said, ‘No!’. So when he pulled us over, we moved over to the side and the spotlight comes on.

You don’t usually expect that, and then on the loudspeaker he said, ‘Driver of the vehicle, with your left hand reach over pull the key out of the ignition and drop them on the pavement!’.

So [Taker] did and then he said, ‘Driver of the vehicle, exit the vehicle with your back facing this way and walk backwards’, and I went, ‘What the hell! This is not like any traffic stop! What are they looking for?’, and I look back and there is Mark [Calaway] walking back and there is the cop on his knees with a gun and he was aiming it at Mark.”

Both Taker & Mantell were handcuffed and released after their car was searched. The Police were looking for a gun related to a drug case, and they had received a call regarding a car similar to the one Taker was driving.

“Unfortunately, I have no Relationship with Bret Hart,” Martha Hart Reveals