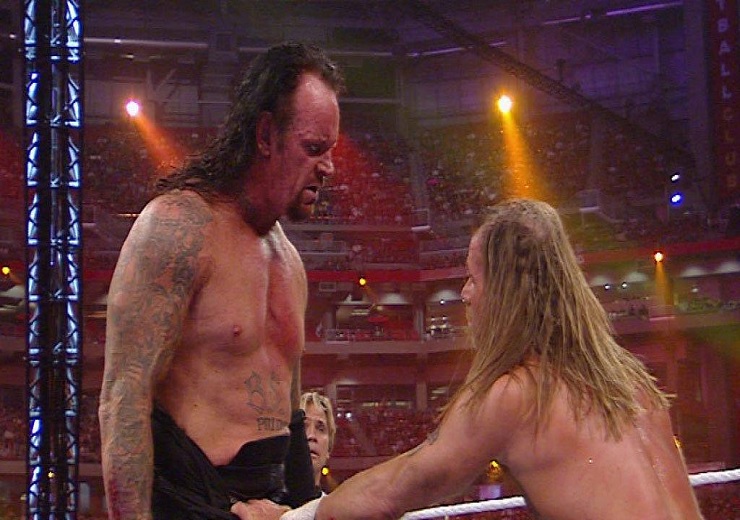 WWE legend The Undertaker believes that Shawn Michaels is the wrestling GOAT ahead of the likes of Stone Cold Steve Austin and ‘Nature Boy’ Ric Flair.

And the ‘Phenom’ is set for his ‘Final Farewell’ at Survivor Series on Sunday as he calls it time on a legendary career with Vince McMahon’s promotion.

‘Taker, who has previously voiced his dissatisfaction towards Michaels in the 1990s, had two iconic back-to-back WrestleMania matches with the ‘Heartbreak Kid.’

The future Hall of Famer said that the two WrestleMania matches with Michaels and the two following clashes with Triple H were his favourite in his illustrious wrestling career.

However, the ‘Deadman’ has suggested that Michaels could “probably [be] the greatest in-ring wrestler of all time.”

The WWE legend told ITN Wrestling: “When pressed for one particular match, it would have to be WrestleMania 25 against Shawn Michaels.

“The match quality, the storyline, this is one of the greatest matches that I was part of. I think Shawn Michaels probably is the greatest in-ring wrestler of all time.

“This match here starts off a four-match series — the two with Shawn where I ended up retiring him next year and then Triple H comes into the picture to take up from his friend.

“And it all ends up with Triple H, Shawn Michaels and myself at the top of the stage after [a] four-match series together.

“That was the end of an era and that’s my proudest body of work in WWE. Those four WrestleManias.”

The Undertaker, who made his WWE debut in 1990, didn’t include himself or Michaels on his Mount Rushmore for pro wrestling.

”I was pissed” – The Undertaker Confronted Vince McMahon

”I Don’t Like Shawn Michaels at all” — Stone Cold reveals…