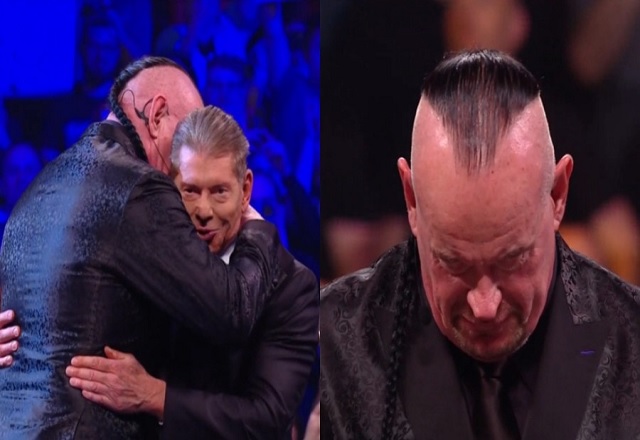 Vince McMahon inducted The Undertaker into the WWE Hall Of Fame tonight. This is rare for Vince since he does not like to be mentioned at the ceremonies but he made the exception for Taker.

Here are some notes from the induction:

Vince named dozens of the people who Taker has worked with over the years. Vince told a story about a Shotgun Saturday Night taping and seeing The Undertaker and Triple H fighting on an escalator at Penn Station. Vince said Taker did that even though he was reluctant.

He also mentioned the time when Taker had to work in a cemetery in the rain and another time when he had to stand on a Thanksgiving Day float for hours. Vince praised Taker as a leader and someone who commands respect because of his toughness, discipline, and intelligence, among other things.

Taker got an ovation that spanned several minutes and it might be the longest standing ovation anyone has gotten at a Hall of Fame ceremony. Taker said he wanted to talk about Mark Callaway, the man under the black hat because he wanted to show the fans the respect that they’ve shown him.

Taker thanked the fans for being loyal and passionate and giving him the motivation to push through the pain and perform. Taker talked about getting into the business in 1986 after he declined to pursue basketball, even though it was not what his parents wanted.

Taker told a story about the time when he roughed a guy up during a squash match and Vince telling him that everyone in the arena and backstage thinks he’s an “assh*le.” Taker said he’s not proud of his actions from that night and this was his first mental move to constantly remind himself that actions matter.

Others included in his speech were Shawn Michaels, Triple H, Bruce Prichard, some of the behind-the-scenes people, his wife Michelle McCool, his parents, his kids, and Vince McMahon.

Before leaving the ring, Taker put on his signature outfit and hat as fans chanted “one more match” and then he ended with “never say never.”

This may have been the best Hall Of Fame speech in history. If it isn’t then it’s definitely near the top.