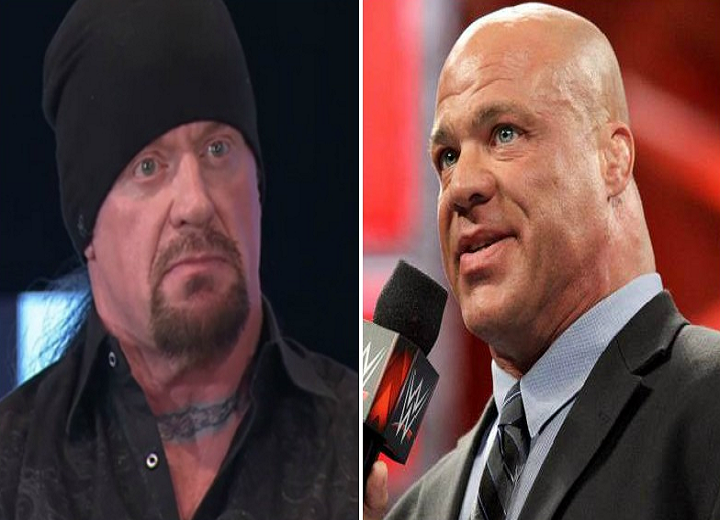 The Undertaker was the latest guest to feature on Corey Graves’ After the Bell podcast, and the Deadman had a hilarious story on Kurt Angle.

Taker is one of the greatest ever performers in wrestling history and he still makes appearances at WrestleMania. Age might have caught up with the Phenom but he still is one of the biggest draws in WWE. Taker has been performing for a few decades now and had several fun stories to share too.

He spoke about his negotiations with WWE and how he was given a chance to try out the Deadman routine which worked well. Taker also had some hilarious backstage stories and one of them centred around Kurt Angle.

Angle is another legend in the wrestling business, however, the Olympic Champion seemed scared of getting punched by Taker:

“I had some really classic matches with Kurt. He was one of my favourites to work with, once he got over the fear of my punch.

“He really was amazing in the ring but I will never forget, the first time that I draw back to throw the big right hand at him, his face was just like I was going to take his head off.

“It stopped me, I think it was on TV and I was about to hit him after he has already waffled me three or four times. He just got this look on his face that I was about to cave his head in and I just stop.”

Loads of praise for other stars
Angle and Taker had some incredible matches in WWE, but the Phenom had praise for two other stars.

He spoke highly of Bret Hart while also of the late great Eddie Guerrero. Taker highlighted how Eddie understood the business and his role very well.

The Phenom explained how Eddie was able to stay a babyface, yet be smart enough to ensure he didn’t look like a coward when facing someone bigger than him.