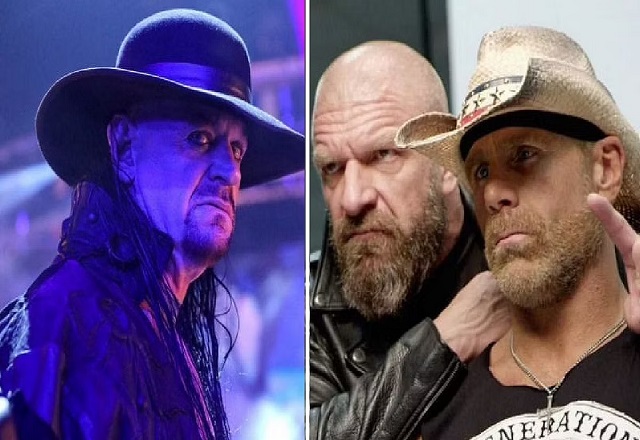 The Undertaker had a message for Triple H and Shawn Michaels during the unveiling of his statue at the WrestleMania 38 Superstore Axxess tonight.

The Phenom is set to headline this year’s WWE Hall of Fame. The in-ring veteran has done it all in a career spanning more than 30 years and will forever be remembered as one of the all-time greats.

A statue of The Undertaker was unveiled at the WrestleMania 38 Superstore Axxess a few hours ago. Several WWE legends were in attendance, including Triple H and Shawn Michaels. Other notable names in attendance were Rikishi, The Godfather, Kane, The Godwinns, and Michael Cole.

The 2022 WWE Hall of Famer seemed ecstatic about the statue and had a message for his Bone Street Krew buddies. He also had an offer for Triple H and Shawn Michaels.

“Honestly, you don’t know how much it means to me. We are forever a brotherhood. No matter where we are, we are always a brotherhood. And you two guys, if you guys ever give up your Kliq card, we might have room for you,” said The Deadman, addressing Triple H and Michaels.

The Bone Street Krew (BSK) was a real-life group consisting of WWE’s top wrestlers, back during the 90s. The following names were the members of the infamous group: Crush, Henry O. Godwinn, Mideon, Mr. Fuji, Paul Bearer, The Godfather, Rikishi, Savio Vega, The Undertaker, and Yokozuna.

The Deadman has referenced the Bone Street Krew on numerous occasions over the past few decades. Longtime fans of the WWE legend are aware that he has a BSK tattoo on his abdomen, as a tribute to the stable.

Related Topics:The Undertakerwrestlemania 38
Up Next