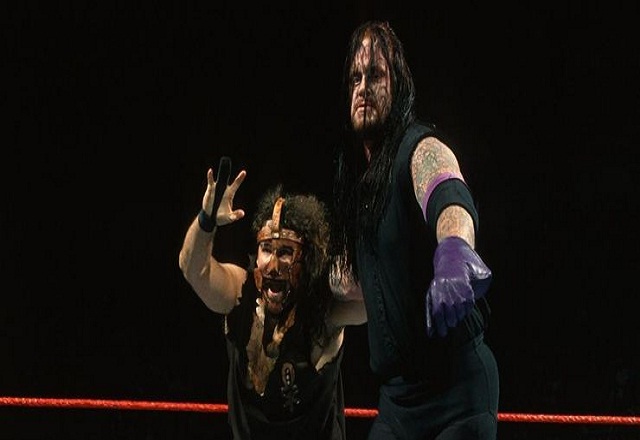 The Undertaker and Mankind’s feud is one of the most physical rivalries in WWE history, but there was much more to it than the Hell in a Cell match!When The Undertaker debuted at Survivor Series 1990 he was a big attraction right away. Unfortunately, The Deadman’s first few years with WWE weren’t the best as some of the rivals that Undertaker feuded with were not on his level. Enter Mankind who debuted on the Raw after WrestleMania XII and he immediately set his sights on Undertaker.

Their feud was remarkable, and Undertaker had something that he could sink his teeth into. Mankind was a legitimate threat to The Phenom, and Paul Bearer ended his five-and-a-half-year partnership with Undertaker to jump ship and side with Mankind. There were certainly moments in their rivalry that tons of fans remember with the infamous Hell in a Cell match at King of the Ring 1998 but others get forgotten.

The Undertaker Beat Mankind In A Dark Match At In Your House 7: Good Friends, Better Enemies

Mankind’s first televised pay-per-view match was against The Undertaker at King of the Ring 1996. However, they actually had their first match together two months prior in a dark match at In Your House 7: Good Friends, Better Enemies.

Of course many won’t remember that as their bout was not televised. As expected their match was hard-hitting and there were still a lot of fans present in the arena to watch the match unfold. Undertaker prevailed with a jaw-dropping Tombstone Piledriver in a competitive match.

The Undertaker Was Feuding With Goldust At The Same Time

Whilst Undertaker was in a high-profile program with Mankind, The Deadman was also engaged in a rivalry with Goldust simultaneously. The Bizarre One was the reigning Intercontinental Champion, and Undertaker actually challenged Goldust for the title in a casket match.

The Deadman was close to winning the title but Mankind interfered and aided Goldust by stuffing Undertaker into the casket. Moreover, Goldust was at his best during his feud with Undertaker but Mankind was always around the corner to give Goldust a helping hand.

The rivalry between Undertaker and Mankind continued with Undertaker returning at Survivor Series 1996. The Deadman came out as a bat and wore his infamous black leather outfit which wasn’t one of the best of The Undertaker’s attires. Nevertheless, there was a caveat as Paul Bearer was erected above the ring in a shark cage.

This was another exceptional match between the two bitter rivals whose chemistry together was superb. They always brought out the best in each other with Undertaker once again prevailing. Fans may forget that Bearer was locked in the shark cage as Undertaker was allowed to give Bearer his comeuppance afterward but The Executioner intervened and stopped that from happening.

At Fully Loaded: In Your House, Undertaker and Austin defeated Kane and Undertaker for the Tag Team Championship. It wasn’t the best of matches and the title was virtually a prop in their feud. Nonetheless, their reign was short-lived as they dropped the championships back to Kane and Mankind in a four-corners tag team match on Raw.

Their Buried Alive Match On SmackDown

Buried Alive matches have certainly been hit and miss with some being more memorable than others. However, The Rock n’ Sock Connection was the reigning WWE Tag Team Champions with The Undertaker and Big Show looking to regain their titles in a Buried Alive match on an episode of SmackDown in September 1999.

It felt incredibly random to have a Buried Alive match on SmackDown considering they’re usually reserved for pay-per-views. Undertaker and Mankind were no strangers to Buried Alive matches as they competed in the inaugural one. All thanks to Triple H, The Unholy Alliance was once again the Tag Team Champions.

Undertaker and Mankind have met countless times so fans are bound to forget every single encounter. After 1998 they met sporadically and they faced off once again on the March 1, 1999, edition of Raw.

It was a significant one as Mr. McMahon announced on commentary that Undertaker would face The Corporation’s Head of Security Big Boss Man in a Hell in a Cell match at WrestleMania XV. Ultimately, Undertaker and Mankind’s match on Raw was their final singles match against one another. They did face off in tag action but as far as singles were concerned that was it.

Undertaker and Mankind’s rivalry was reignited in the summer of 1998 but they took it to new heights inside Hell in a Cell. Their meeting at King of the Ring was off the charts, and Mankind showed a lot of guts as he took a brutal bump off the top of the cell with Undertaker throwing him off it and onto the announce table.

Mankind wasn’t done yet and he climbed back at the top of the cell to continue his fight with Undertaker. It was not a wise decision as The Undertaker chokeslammed him through the cell with parts of the roof giving way. Moreover, it wasn’t the first time that the two rivals faced off at King of the Ring as they did two years prior in Mankind’s debut pay-per-view outing.

Their Battle For The WWE Championship At In Your House 14: Revenge Of ‘The Taker Was Their Last Match For One Year

Undertaker finally ended his long-awaited WWE Championship drought for his second run with the gold as he defeated Sycho Sid in a lackluster main event at WrestleMania 13. However, The Deadman renewed his feud with Mankind in a high-profile WWE Title match at In Your House 14: Revenge of the ‘Taker.

This was another solid match in Undertaker’s first title defense. They didn’t headline the show but Undertaker retained the WWE Championship. What some fans will forget is that the pair did not touch base for another year with this being their final match against each other for 14 months.

With Mick Foley in his Dude Love persona, he was surplus to requirements as he failed to defeat Steve Austin for the WWE Championship at Over the Edge: In Your House. Therefore, Mr. McMahon turned his attentions towards Undertaker and Kane, who he felt could get the job done but the brothers battled in a number one contender’s match just 24 hours later on Raw.

Kane and Undertaker battled back in forth but Foley reverted to his Mankind persona, and he cost Undertaker a chance at facing Austin at King of the Ring. As they say, the rest is history, and Mankind and Undertaker’s feud was back on because of Mankind’s interference.

In their first couple of matches together, Mankind had Undertaker’s number. He secured a monumental win at King of the Ring 1996, and the duo collided in the first-ever Boiler Room Brawl at SummerSlam.

The Undertaker was in pole position to retrieve the urn from Bearer but their five-and-a-half-year partnership was over when Bearer refused to hand the urn over to Undertaker. Bearer gave it to Mankind who secured a second successive victory over The Deadman. However, in many wrestling rivalries, one wrestler would find a way to beat their opponent by pinfall but Mankind never managed to do that against Undertaker. He did earn sporadic victories over Undertaker but those came by disqualification, count-out, or in tag action where he did not pin Undertaker.