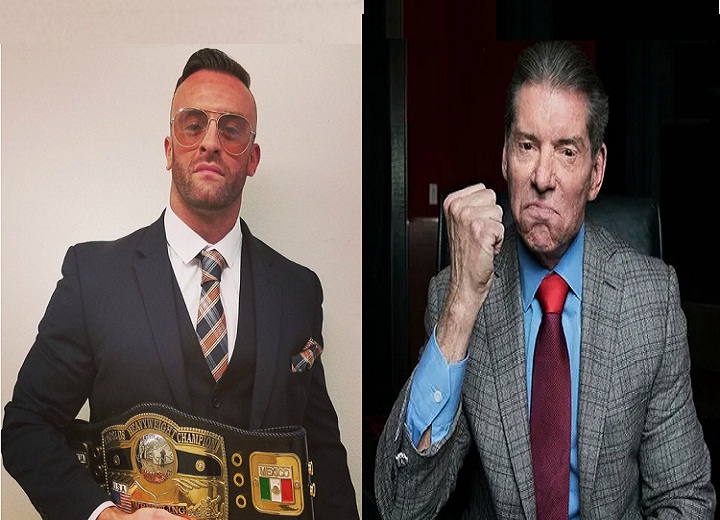 NWA World Heavyweight Champion Nick Aldis has this to say concerning signing with WWE. NWA owner Billy Corgan bought the company in May of 2017 and Aldis was signed shortly after during the summer.

Aldis spoke with with Chris Van Vliet about how the company first got started and how a conversation with Dave Lagana inspired him to continue wrestling.

“Mickie [James] and I were in the process of house hunting and moving, we were in a hotel and Dave [Lagana] called me and just kind of said what’s going on with you, what are you doing,” Aldis said.

“I had just fallen off the face of the earth in wrestling, everyone just assumed I would go to WWE after I finished up with TNA and that didn’t happen.

I was just bouncing around with Mickie on the independents, then she got the opportunity to go back and do the NXT match with Asuka and crushed it, and then Vince brings her back full time and we go ‘well that changes everything’. Dave was in the same position a lot of people were in, he was like ‘Have you quit the business? Like why are you not in WWE and what else are you doing?'”

“This new style had just taken such a hold on everything, celebrating high impact, fast paced, high spots style. Nobody was really thinking ‘let’s have a guy like [me]’. You have hot and cold periods and I was just cold, nothing was really grabbing me.”

Aldis said he described to Dave Lagana what pro wrestling nowadays is missing compared to what he would like to see more of in the industry.

Vince McMahon was the greatest promoter of all time but now he’s like an Executive Producer of this giant Nickelodon wrestling. I think there’s a bunch of people that miss the classic ‘irresistible force meets the immovable object’ and here’s the showdown, who’s going to win, and who’s going to be the world champion.

“I got off the phone with Dave and Billy called me two minutes later, gushing about wanting the feeling and atmosphere and I said, ‘great you’re speaking my language’.”

Aldis also explained during the interview why things didn’t work out with WWE and the issues of having his wife working there.

“[Mickie working there] is kind of more of a problem,” Aldis admitted. “I’m looking at it then thinking as, is this a favor? Or then it just becomes an extra complication we don’t want to worry about.”

Aldis admitted that there is someone with the company who does not want him there.

“The reality is that there’s somebody there who is very, very successful, who for whatever reason decided that he didn’t want to have anything to do with me because of some of his actions on a personal level,” Aldis revealed. “It’s one of those weird things, there’s no way to address it.

“I’ve had conversations with [WWE] over the years. I just got to a point where I just went I’m just done chasing that dragon. Ultimately what is my vision here, is it to be in the WWE or is it to be a big time pro wrestler? One way provides a much quicker path to the other, but it’s not the only path.”

While Aldis declined to reveal any names, he did admit that no one has confirmed that it is the reason that WWE hasn’t signed him. He noted that if he did end up signing with WWE, the person’s issues with him would likely hold him back anyway.

“If that’s the case, of course no one will confirm or deny it,” Aldis noted. “But if that is the case, what would happen if I did go? It wouldn’t make any difference if I did go because clearly it would still be problematic. So cool, I’ll go over here and make a big deal at something else.”