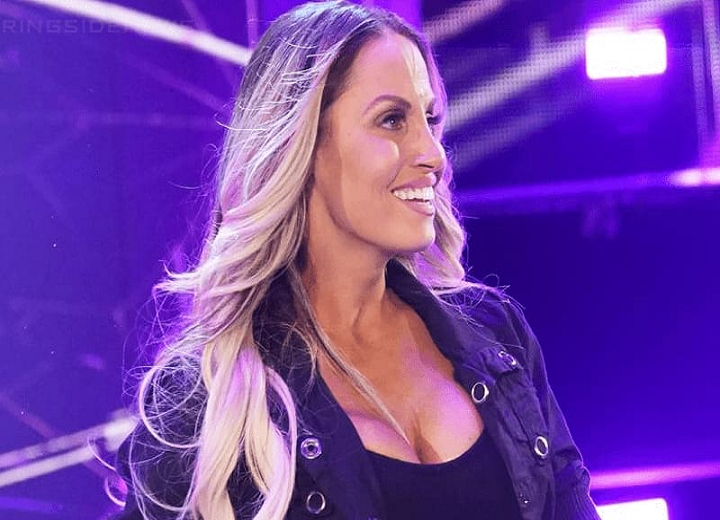 Trish Stratus recently expressed her love for how she took care of her kids when they were very young. Earlier this month, the WWE Hall of Famer went to Instagram to celebrate World Breastfeeding Week and showed photos of her breastfeeding her two children.

“As [World Breastfeeding Week] concludes I’m reflecting and feeling ever so grateful that my body was blessed with the ability to provide for my babes (I know this is not the case or choice for everyone),” Stratus wrote in the caption. “By choosing to accept the sole responsibility for both of my babes’ health and nutrition for the first 6 months of their lives was empowering. Women’s bodies are incredible!

This [World Breastfeeding Week], let’s celebrate a woman’s right, choice and ability to feed their baby… and, let’s normalize this so she may do it whenever, however long and wherever she damn well wants! Oh! And to those who want to comment on my boob, puppies, or whatever you want to call them – how about we put our big boys pants on today, cool?”

Stratus, 45, is all about her family ever since retiring from pro wrestling. She also continues to impress on social media, showing off her “mom bod” while wearing a bikini in July. The last time Stratus was on WWE TV was in 2019 when she lost the Charlotte Flair at SummerSlam.

While appearing on Oral Sessions with Renee Paquette, Stratus talked about how Dwayne “The Rock” Johnson told her she would be “The Female Rock.”

And is that realistic? I’m not sure, because it seems like it’s never really been done so far. Then I remember The Rock said to me one day, ‘You know, you can be the female Rock.

’ And I was like, ‘Oh my god. Okay, I’m going to do that. Yes.’ So I just knew that it was my job then to be the best that I could be. And that would entail training and performing at my peak every time and outdoing my last performance.”

Will Smith is entering the world of racing. According to Deadline, the Men in Black star will produce a new film called Clean Air, a romantic comedy set in the world of NASCAR.

Smith will produce the Amazon Studios movie with NASCAR, Jon Mone of Westbrook Studios and The Chainsmokers’ Kick The Habit Productions.

Clean Air follows Lyla, a sports agent who loses her star client before the start of the NASCAR season. It leads to her taking a chance on a 17-year-old dirt track racer named Piper Kyte, but she will have to win over her father, Matthew Kyte, a former NASCAR champion who walked away from the sport and hasn’t been seen in four years.

Deadline says that Smith was able to team up with The Chainsmokers because of the COVID-19 pandemic. Executive producers Drew Taggart and Alex Pall were ready to get their development state going and were looking for a romantic comedy.

They discovered Clean Air via Dan Marcus of Kick the Habit Productions, and the script then found its way to Westbrook Studios with Smith as the founder. Smith has no plans to star in the new movie but has been hands-on in the process after having a strong reaction to the script.

Smith launched Westbrook Media in 2019 with Jada Pinkett Smith. The production company is making moves in the movie industry as King Richard will be released later this year.

Westbrook is also working on a remake of the 1980s film Planes, Trains & Automobiles with Smith and Kevin Hart starring. Then there’s the sports drama Redd Zone starting Jada Pinkett Smith, and another film that’s in development is the live-action musical Soul Superhero.

Related Topics:Trish Stratus
Up Next