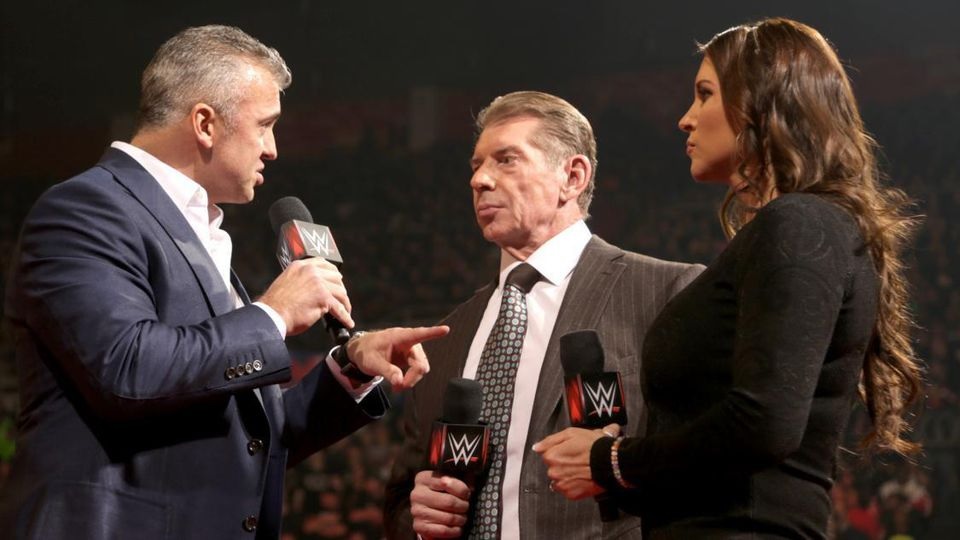 At just 18, Shane began working for his father’s company, World Wrestling Federation. Despite being the boss’ son, he wasn’t thrust into a prominent position right away and had to earn his stripes in the warehouse among other areas as a summer job initially. His first dabble on-screen came as a referee.

By the turn of the millennium, he was very much a part of the decision process in WWE, and that included creative.

In 2000, Shane told his father he wanted to buy and run Paul Heyman’s ECW as a separate entity. The idea was rejected and picked the company up for it’s tape library around a year later, almost certainly for a fraction of what the price would have been a year earlier.

After a DVD on ECW became WWE’s best-selling ever, Rob Van Dam convinced Vince to run a reunion show they would call ‘One Night Stand’ in 2005.

Heyman has since said Shane wanted to revive ECW as an online-only, developmental brand for WWE. The idea is that, as an online property, they would attract hardcore fans and wouldn’t have to let TV networks dictate the content, certainly the level of violence ECW had become famed for.

Shane told Stone Cold Steve Austin years later he envisioned it being what the Triple H-led NXT is today.

“Triple H has done a great job with a whole cast of guys and are building that territory, Dusty Rhodes prior to him and Paul [Triple H] has taken it to a whole new level. Part of that was originally what we wanted ECW to be when we first purchased it.

“We wrote the business plan for ECW just to be that that Triple-A system because we needed guys, whether it is coming up or coming down. You’ll have certain guys that are going to peak, but can’t stay at the peak forever. So as they are coming down, they start taking some of that knowledge, take a kid and educate them.”

In the years that followed, Shane was at the hear of many major TV deals the company managed to land, but fast-forward to 2009, he had another to run by his father. He wanted to purchase UFC.

Of course, Ultimate Fighting Championship is the leader in mixed martial arts, a sport that was still very much in the growing process back then.

In addition, WWE has always made a lot of money through weekly programming/television deals and running live events every single week of the year.

Shane saw the potential for UFC to expand in the same vein, but Vince passed on the opportunity and Shane couldn’t raise the capital himself.

He met with UFC president Dana White, hot on the heels of selling around $50 million worth of WWE stock and handing in his resignation from his position as Executive Vice President of Global Media, a job he wouldn’t actually leave until January 1, 2010.

Dana White was open to the idea of working with Shane McMahon when asked about the meeting, White simply said: “No comment.” Eventually, the UFC was bought for $4 billion in 2016 and currently have a deal with ESPN worth $1.5m over five years. It seems like Shane had the vision after all.

Still, this was the straw that broke the proverbial camel’s back and Shane was tired of his father overlooking his ideas. It was at this time he realized Vince saw his sister Stephanie and husband, Triple H, as the heirs to the throne.

WWE legend Jim Ross explained what happened when Shane left the company in 2009.

“But I didn’t know drastic times would take these drastic measures whereby Shane would be leaving his birthright, be leaving the family company, to go out on his own. I think at the end of the day, folks, all Shane McMahon wanted to do was make his dad proud in the family business, and it seemed, in Shane’s view, that that opportunity was never going to exist.”

Ross went on to explain that Vince had told him he saw more of himself in Stephanie and thus, he trusted her more with his precious company.

“Vince told me one time, Vince loved both of his kids, still does, great grandchildren, Stephanie’s got all girls, Shane’s got all boys, it’s a great situation, but the bottom line is, Vince told me one time, ‘The girl is more like me than the boy.’ I don’t know how we got in the conversation but Vince always saw that Stephanie had that eye of the tiger, very aggressive, sometimes hyper aggressive in the eyes of some I’m sure, but that’s what he wanted,” he explained.

“He wanted controversy, he wanted strong leadership. He wanted impactful players in that role, and he thought Stephanie had more of Vince’s personality than did Shane, and Shane was more like [Vince’s wife] Linda.”

McMahon’s next move was to sit as CEO for a successful cable provider in China. He invested in an Indian motorcycle shop in New York, and he sits on the board of a couple of companies, one of which handles representation of major sports stars that has included Roy McIlroy.

In 2016, he returned to WWE in an on-screen capacity. Speaking to Mick Foley shortly after, he explained why he had to leave in the first place.

“I think with any parent and child relationship, it’s tough. Especially with the older guard allowing the new guard to flesh those ideas out and try them, go for it. Because they’re so guarded against it,” he said.

“No [Vince wasn’t open to his ideas] and what grew out of that, it stopped being a collaboration and stopped being fun and when that happened – you know, the WWE defines my father.

“And I wasn’t going to allow a deteriorating business relationship to affect our personal lives, and that’s exactly what was happening. So I decided ‘you know what? I’m not going to do this. I love him too much’ and I decided to leave.”