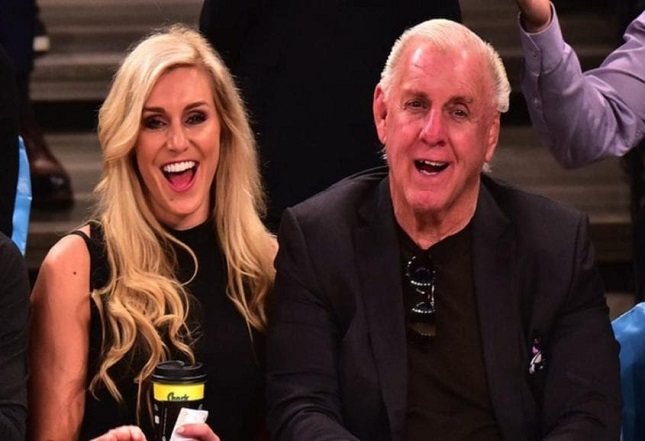 WWE Raw Results watched a recap of Lacey Evans and Ric Flair’s antic last week before it cut to an interview of them from earlier in the day when Charly Caruso asked about their relationship.

Evans chastised her for acting like she worked for TMZ, and then answered for Ric that last week he lived up to the Dirtiest Player in the Game.

As for their relationship, she said she’s simply learning from the greatest man to ever enter the ring and said she and Ric had special seats to watch Peyton Royce defeat Charlotte Flair.

WWE Raw Results returned when Royce attacked Flair from behind on the ramp, and after a brief altercation, officials separated them as we headed to commercial.

Back from commercial, the match started and Flair forced Royce into a corner and kicked her down into the mat, and then attacked her again and hit a couple of shoulders.

Royce countered by turning Flair into the corner and returned the favor with several kicks to the Queen.

Royce hammered on her back, but Flair took her down and beat on her before Royce slipped free. Flair then forced her into the ropes and the pair rolled to the floor.

Flair hit a handful of chops before throwing Royce into the ring. Royce continued rolling and slipped out the opposite side by the announce table.

Flair followed her out and beat on her some more and then bounced Royce’s head off the announce table.

Flair threw her into the ring and Royce rolled out to the floor again and Flair hit a series of chops before Royce ducked and Flair chopped the ring post.

Royce hit an elbow on Flair’s right shoulder and locked in a reverse chin lock.

Flair powered to her feet and rolled Royce over her shoulder before hitting a clothesline and then throwing Royce into the turnbuckle and then choking her out on the top rope.

Royce sidestepped a splash attempt and rolled Flair up for a near pinfall.

Royce hit a series of kicks on Flair’s back, and Royce threw her into the corner and choked her out.

Flair then nailed her with a big right and slammed Royce’s back into the mat for a pin attempt, but Royce kicked out as Ric Flair came out.

Lacey Evans followed him wearing one of Ric’s old robes.

Royce nailed Flair for a near pinfall as we headed to commercial.
Flair sends a message

Back from commercial, Flair blocked Royce’s attempt to slam her head in the turnbuckle and rolled her up for a near pinfall.

Royce then charged Flair, but she hit a drop toe hold and Royce went face first into the middle turnbuckle.

Royce hit a jawbreaker and threw Flair into the ropes, but Flair hi a kick. Royce hit her own kick and then a spinning kick over the ropes.

Royce charged Flair and Flair caught her and slammed her into the turnbuckle for a near pinfall.

Royce headed to the apron and Flair knocked her to the floor with a big boot. Flair then challenge Evans to get into the ring and face her.

Royce barely made it into the ring to break the count and was welcomed to some stomps by Flair.

Flair hit a shoulder in the corner, then hit a knee drop on Royce’s left leg she draped on the ropes.