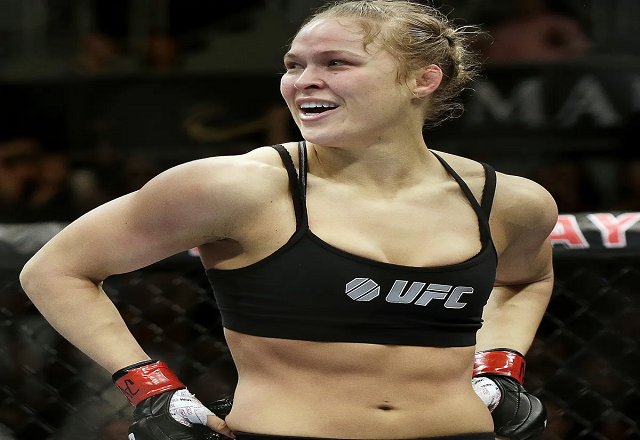 It’s been almost a year since Ronda Rousey last entered the Octagon, and at last, the wait for her return is over. That’s right folks—Ronda is back.

Despite not fighting since her first-ever loss to Holly Holm at UFC 193 in November, this year has been a busy one for Ronda. During her break, Ronda took time to focus on her movie and entertainment career, posing for and landing the cover of SI Swimsuit in NOTHING BUT BODY PAINT, as well as becoming the first face of Reebok’s #PerfectNever campaign to empower

women. In fact, it was just a few months ago in said Reebok ad that Ronda first hinted at her return by saying, “Perfect never gets a shot at redemption. So, yeah, I’m fine not being perfect.”

“I’m not running from anyone. I’m the champion and I can choose who I’m going to fight.

“I will choose what’s best for me and Ronda would be ‘the’ main fight; that’s why it has to be against her, it has to be with Ronda.”

So how better to celebrate Ronda’s epic comeback than with a look at some never-before seen BODY PAINT photos from her shoot in Great Exuma?! This day just keeps getting better and better.

overed in colorful body paint, the UFC fighter posed seductively on the beach, immediately wowing our own editor and fans alike.