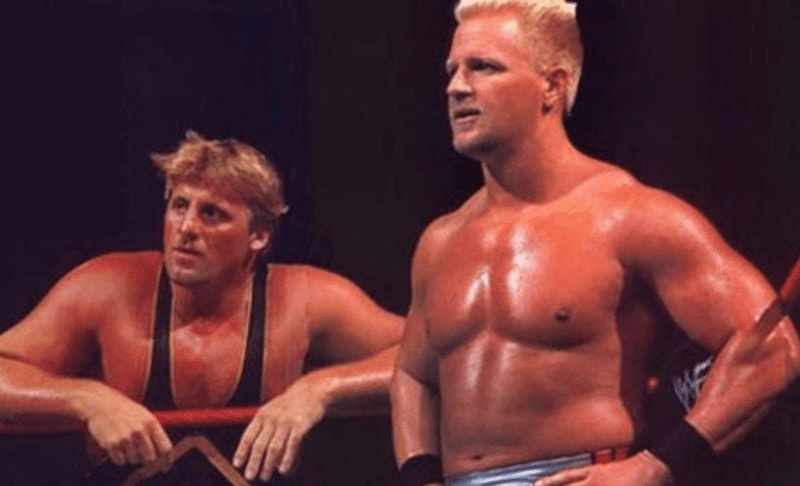 Owen Hart passed away on May 23, 1999 after a tragic accident at WWE’s Over The Edge pay-per-view. WWE Hall Of Famer Jeff Jarrett honored his friend Owen on the “My World” podcast. In the podcast, Jarrett was asked what his first impression were of working his first singles match with Owen 1/20/94 in Torrington, CT:

“Getting up to WWE, Owen said, ‘Well, I guarantee our mat is going to be alright, but this ring is going to be harder than hell for you. The rings were drastically different (than the rings in Memphis)…Owen knew how to work. He was smooth, but he was snug. He didn’t mind knocking the hell out of you. He was tight with everything. He could obviously handle himself wrestling. He could get right into the high flying and weave everything together. Owen, it goes without saying, is really talented.”

Talking about the day of the death of Owen Hart, Jarrett said: “Prior to today, I’ve never really said some of these things publicly, but this is a part of my story that I didn’t process for so long. I’ve only taken bits and pieces…Matt Miller came and said, ‘Owen, they want you now because you have to go up in the rafters. I knew I was on after Owen. I went down to gorilla and then came back. Owen was taking off with his garb and his outfit. I went into the dressing room and I already had boots and tights on, but no shirt and no glasses…I can remember this kind of stuff, literally like it was yesterday of Matt running up the halls saying, ‘Jeff you’re up. You’re up. You’re up.’

Owen Hart and The Ultimate Warrior

I said, ‘What?’ thinking he was ribbing and he said, ‘Jeff, you’re up.’ I said, ‘Owen is up.’ He said, ‘No, Owen fell.’ That convinced me though that I’m up. Then I heard several screams, ‘Jeff.’ All of a sudden I’m taking off, I go, and as I get down there, people in production said, ‘We’re going to do a promo.’ I thought, ‘Do a promo?” I can tell you if you’ve ever been to a car wreck or even hospitals, the heaviness of the room, of the area, but they said, ‘You have to do a promo.’ That’s when I thought, ‘He didn’t fall or blow out a knee. This is a lot more than Owen fell.’

When they pulled me over, and the interviewer, and where it was at, 30 feet from gorilla, and as they’re going, Francois [Petit], I have a vivid memory, he was a trainer, there is a mass of people and it is a gurney, and Francois is up on top and giving chest compressions. To this day, I’ve never watched any of this event back. I didn’t watch the promo, none of that. But, I vividly remember the feeling of ‘In 3,2,1’ and the promo rolls.

I finished it. Off we go. They grabbed me and said, ‘Go right to the ring.’ Walking down that ring, and getting up, and again, these are thoughts I’ve stuffed for 18 years. But, getting up in that ring, and walking around like I do before matches, knowing that if I’m first entrant, second entrance, and going to the place where Owen had fell, and feeling the ring.

Again, I guess you can say the luxury of processing things that, to this day, when you hear about, in treatment I was taught about PTSD, post traumatic stress disorder, I always thought that was for folks that went to war, but being up in that ring and feeling that, that’s when the heaviness came over.

Related Topics:Owen HartWWE Hall Of Famer Jeff Jarrett
Up Next