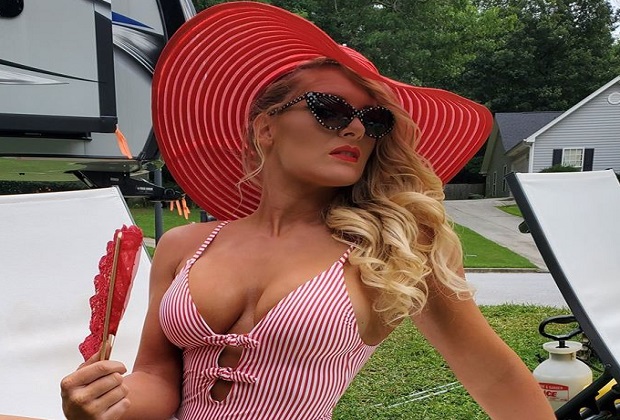 Lacey Evans has made great strides in the business of wrestling in a very short time and many fans including WWE Superstars are insinuating that she came in through the back door.

They argued that considering Lacey Evans’ talents and skills, making her way to the top of the WWE tensed roster in a very short time can only be possible with women who opens their legs at will for WWE officials.

Here are fast facts you should know about the Lady of NXT, Lacey Evans.

As things tumbled on, Sonya Deville pins that Lacey Evans sleeps around with WWE officials and “god”.

Sonya Deville in an interview where she originally called out Becky Lynch, has her own thoughts on why Evans has progressed so quickly.

Responding to Evans highlighting that she has main evented on Raw and other pay-per-views, Deville posted: “Ohhh Id for sure get those opportunities if I went about it the same way you do …nasty.”

Evans then posted back “Your lack of success is a hard pill to swallow,” before highlighting that she has a husband.

She then added: “What man am I trying to please?”

Deville responded: “You’re right I’m not swallowing anything maybe that’s the difference between us.”  Deville went a step ahead and hinted that, Lacey Evans is dating and sleeping with WWE “gods”.

But Deville is not the only one who have said Lacey Evans is dating and sleeping with WWE “gods”. Word is that it is already being said and known by everyone in the WWE locker room and whatnot.

Some even say, Lacey Evans would take any top WWE official at will so long as he has the power to influence her career to the top of the roster.

You likely already know this if you watch NXT, but I can’t exclude the fact that Evans is a U.S. Marines veteran.

Evans joined the Marines at age 19. She excelled from the start, graduating out of boot camp as her company’s highest-ranked shooter. She went on to serve as a member of the Marine Corps Special Reaction Team, which is the military equivalent of a SWAT team. She left the service after five years, having achieved a rank of sergeant. For those with military experience, you understand just how remarkable that is.

#3. Her Ring Name Is Her Sister’s Real Maiden Name

Here’s a neat little factoid. Evans’s real name is Macey Estrella, but her ring name is her sister’s real maiden name – and it’s a pure coincidence how that came about. As Evans explained to The Post and Courier in 2017:

“When we had to submit a list of names that we like, I really liked Lacey Loretta. They (NXT) chose the last name Evans, and the first name Lacey which, believe it or not, is my sister’s name. So they made it Lacey Evans, which was my sister’s legal name up until the time she got married.”

#3. She Had A Rough Upbringing

Actually, “rough” might be an understatement for Evans’s childhood. After her mother left when she was just ten years old, Evans and her siblings lived a transient lifestyle as her drug-addicted father looked for construction work.

“We traveled a lot, so I honestly lived in a tent for a while in Alabama and Louisiana. I spent a lot of time in Texas. I grew up all over the South. My dad just kind of followed construction. Between drugs, it got him in and out of trouble, so we were traveling a lot. I never was anywhere for long.”

Evans candidly revealed that her father was physically abusive:

“My father had a very bad temper and was very cruel while I was growing up. He was physically abusive. It created lasting problems, and this is something as a family that we deal with constantly to this day.”

Evans’s father died of a drug overdose before he could see her WWE dreams realized.

Lacey is lucky in love! She got married to her high school sweetheart who has been a bedrock of support to her. Lacey and her partner have been together since she was 15 years old.

Talking about her husband’s job, he is a general contractor and works for their construction company.

In the course of their 14 years of togetherness, Lacey and her husband are parents to a cute little daughter, Summer Estrella. Summer is currently at the age of six.

Although Lacey’s husband is someone who prefers to stay away from the limelight, Lacey sometimes shares pictures with her husband on Instagram. Similarly, on Summer’s Instagram handle, she seldom posts pictures with her daddy and gives the glimpse of their family life.

However, the report on Evans Lacey’s personal life is that she’s now a single mum and her husband has left her. Some online magazines have also confirmed her to be a single mother and a divorcee.

In the course of their 14 years of togetherness, Lacey and her husband are parents to a cute little daughter, Summer Estrella. Summer is currently at the age of six. Lacey is very thankful for the presence of her husband in her life.

If it’s not inspiring enough that Evans completely overcame the incredible odds stacked against her, she also somehow manages to balance being an NXT Superstar with being a mom – and she brings her daughter on every tour.

“Thursday evenings when I pick her up from school, her bag’s already packed and I take her with me to the shows. We’ll do homework backstage and do what she needs to do.”

And when she’s not a supermom/superstar, Evans is also running the construction business that she started when she was 22. Is there nothing this woman can’t do?

#7. She Wrestled Her First Match One Week After Going To Her First Wrestling Show

While most wrestlers grew up watching the business, Evans readily admits that she knew absolutely nothing about pro wrestling until she was in the Marines. One weekend, a staff sergeant who moonlighted as a pro wrestler invited her to a show. That was all it took for Evans to get hooked – and she competed in the ring herself the very next weekend:

“I had never watched [wrestling] prior to that, wasn’t a fan and didn’t know anything about it. I watched one show and I was actually performing in the ring the next weekend with that same staff sergeant.”

To be clear, Evans wasn’t entirely unfamiliar with a wrestling mat. In middle and high school she turned to sports as an escape from her tumultuous home life. One of those sports was wrestling – and she won a state championship.