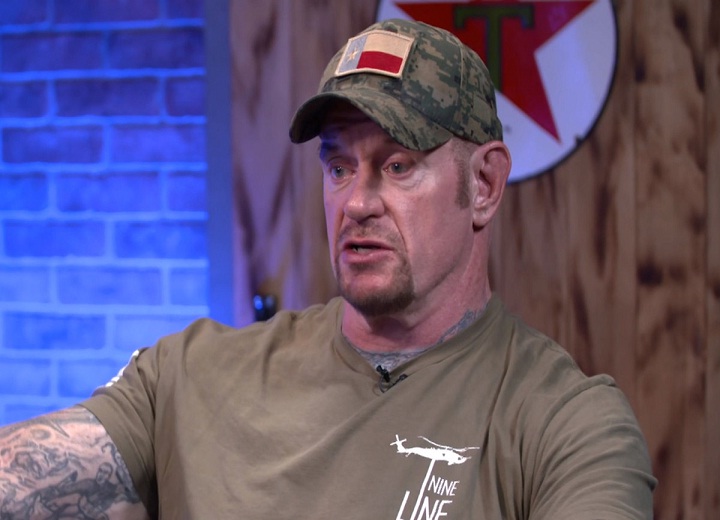 For Mark Calaway, known professionally as The Undertaker, death is, understandably, a constant presence. Throughout the best part of a 30-year stint at the WWE – the multi-billion dollar TV behemoth that sees costumed wrestlers face off in a mishmash of theatre and live sports – he has played an “undead” wrestler who uses funereal imagery to strike fear into the hearts of his rivals.

He has put opponents in bodybags, caskets and atop crucifixes. In a scene that left a lasting imprinton my nine-year-old brain, he hung one by the neck from the scaffolding above the ring. He has been set on fire three times (twice as part of the show, once by accident when a firework set him alight on his slow march to the ring) and buried alive. His entrance music is, appropriately, a version of Chopin’s funeral march.

his life carried on like this for the next two years, making sporadic returns to the ring in search of his fabled end. He admits to envying Shawn Michaels – with whom he shared two of the greatest Wrestlemania matches of all time in 2010 and 2011 – who retired after their 2011 bout and has only made cameo appearances since.

“He left on his terms, but he also got to leave on a match that he was extremely happy with that felt like it fulfilled his legacy.” Calaway, on the other hand, last wrestled at Wrestlemania 36 in April, defeating AJ Styles in a buried alive match (wherein the goal is to place your opponent in an open grave) in an atypically cinematic segment that was filmed outdoors with no audience, due to the coronavirus pandemic. There was no ceremony, no tearful goodbye. He’ll likely go again.

There’s another internal battle going on here and it’s one that most professional athletes can probably relate to: he’s reluctant to give up what has been a defining part of his life for the past 30 years. “You want to feel like… I know the business is going to go on without me. I’m not that big of a narcissist. I know the business is going to continue. But it feels like sometimes I may not have as much control in the direction.”

Yet, the longer he goes on, the riskier his matches will become, as his body continues to wear and tear. He’s thinking about death “now more so than ever.

“As I’ve gotten older I’ve gotten more in touch with my faith and that overrides everything else,” he says. “I think maybe early on I might have looked at death as, ‘I’m impervious to that,’ as asinine as that sounds, but as you get older and you lose people that are important to you, it still hurts and I haven’t figured out how to… There’s nothing I’ve done professionally that helps that any way for sure.”