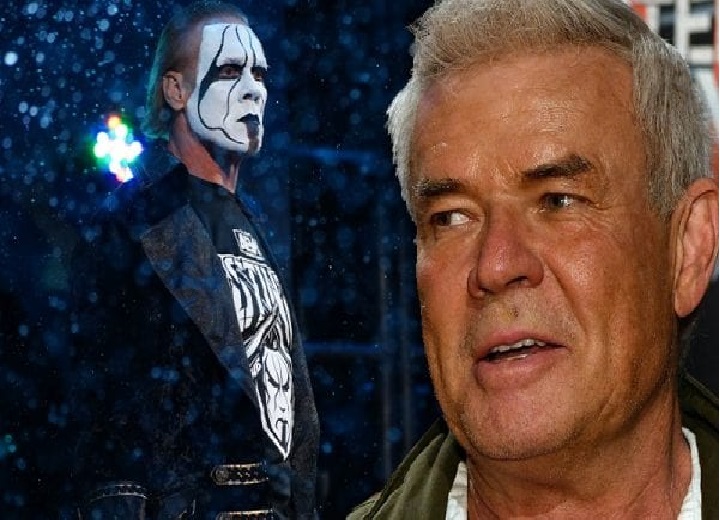 Eric Bischoff discussed the infamous Hulk Hogan vs. Sting match at Starrcade 1997 following months of build and hype. Sting in past interviews blamed some of the subpar match result on the fact that he hadn’t wrestled in nearly 12 months, and on Hogan’s bad knees.

The match received a lot of criticism after for a variety of things such as match quality, the decision to not have Sting repel from the rafters during his entrance, and more, including many fans being surprised that Sting looked much smaller and less tan than they had come to expect from him.

Sting in past interviews blamed some of the subpar match result on the fact that he hadn’t wrestled in nearly 12 months, and on Hogan’s bad knees.

Bischoff discussed the issue of Sting’s tan and size, saying Sting was not prepared for personal reasons. Highlights are below.

On Sting not being prepared for the Starrcade 1997 main event: “I’m not going to get in to Sting’s personal life, that’ll be up to Steve Borden some day, it’s not my position, love the guy too much, respect him too much, not going to go there.

But it is fair to say that, yeah, when Steve showed up, in my opinion as well as Hulk’s, not prepared, yeah, the tan was one aspect but as Dave [Meltzer] pointed out, visibly he was not the same guy, and there was a reason for it, and it was a human reason, and I understand it, and I’m not trying to deflect criticism, not trying to justify,

I don’t give a fuck what people think anymore about it, I really don’t, it is what it is, I can’t change it, but to really understand it, those listeners who really want to feel like they’re getting a little bit more than just a topical explanation of things, Steve Borden, the human being, was not prepared, mentally or physically, as Dave Meltzer pointed out, or emotionally. He was not prepared.”

On having to adjust on the fly to not having the same Sting they thought they had: “And we had to make a change, we had to adjust on the fly, we had to think about, OK, all this great story, all this great planning, and I don’t mean, not trying to make anyone feel bad, it is what it is, was what it was, we’ve all lived through it and prospered, so it’s good, but in that moment, it was not the same Steve Borden or Sting in the eyes of the audience that we thought we had. And the rest is history.”

On if there is any truth to the rumor that Sting was intoxicated when he arrived at Starrcade 1997: “No.

That’s not it, that was not it, it’s got nothing to do with it. And if I have ever said anything to imply it, I want to make it clear right now, I didn’t mean that, that was not the issue. It was a personal issue, not related to drugs or alcohol.”