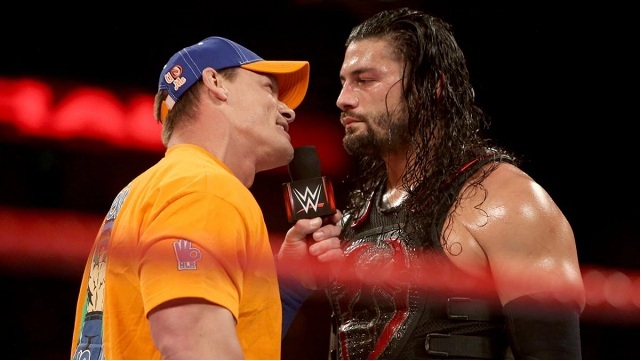 Universal Champion Roman Reigns is gearing up for the Summerslam challenge. He will be defending his championship title against John Cena at the PPV event.

Ahead of the quintessential match, Reigns appeared on The Pat McAfee Show where he took a dig on his opponent for Summerslam.

In the build-up of this match, Roman Reigns has never shied away from bragging about Cena, and his thoughts about the 16-time World Champion were no different on the Pat McAfee Show.

Roman expressed his views on Cena in the interview. He started off by praising him for the Make-A-Wish foundation, but then the narcissist side of Roman Reigns got the better of him as he said Cena is levels below him when it comes to the profession of sports entertainment.

“There’s a lot of good things John Cena has done… obviously Make-A-Wish, he’s a very charitable guy, but when it comes to our profession of sports entertainment, he is levels below me in this game.

You know what I mean? Entertainment is story-telling, right? I’m the greatest storyteller of our generation, of our time. He’s a big name, he’s a big star, he’s a movie star now. But he, like so many other greats, they camouflage themselves. They disguise themselves.

You see me every Friday night, I have to dull this s–t down. You know what I mean? I come out there in some sweatpants and some J’s. I don’t have to throw on the crazy colors, wear wristbands all over my body. I don’t have to make myself something that I’m not.”

“You see me every Friday night. I have to dull this shit down..

I come out in sweatpants & some J’s. I don’t have to throw on the crazy colors, wear wristbands all over my body..

I don’t have to make myself something that I’m not” ~ @WWERomanReigns #PatMcAfeeShowLIVE pic.twitter.com/V8CtumCWt0
WWE News: Reigns said that Cena is trying to use his name to promote his upcoming flick The Suicide Squad

Roman wasn’t done humiliating and bragging about Cena there yet, he continued further and said that the Leader of Cenation is using his name to first promote and now to sell tickets to The Suicide Squad, which has already hit the theaters. Roman said,

“If he would’ve just come here to promote his movie, ‘Suicide Squad, yah! It’s a good movie! Go, watch it!’ … You can open the show, you can pep up the crowd, do that, and then I’ll stay in the main event where I belong, and I’ll close the show, and we’ll be done.

“But he’s smart. You know what I’m saying? He’s smart. If I was him and I’m promoting a movie, and I want to get that buzz, what do you do? You go to the Island of Relevancy, you go to The Tribal Chief, and you try to find the biggest thing cooking right now, and that’s me.

So, he’s trying to use my name to promote his movies. So, [Suicide Squad director] James Gunn, you’re welcome.”

The interview was more of Roman Reigns praising himself as any other self-centered and narcissistic person. He was brimming into his Tribal Chief and Head of the Table gimmick, and he feels like he has reached the peak of Mount Rushmore.

John Cena vs. Roman Reigns at WWE Summerslam for the Universal Championship is going to be a match for the ages as the domineering side of Roman will meet the fan-loving side of John Cena.