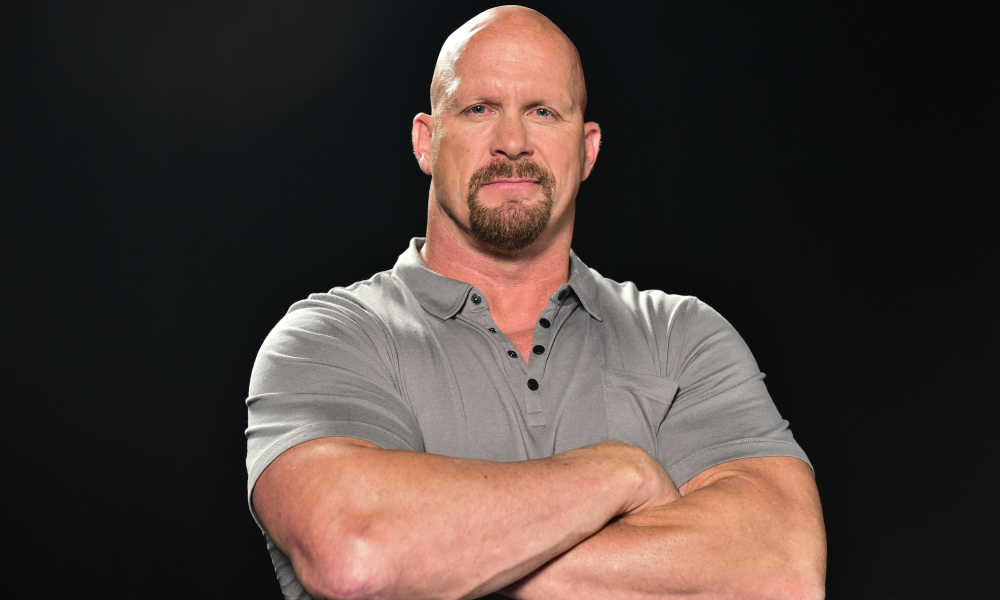 ‘Stone Cold’ Steve Austin returned to an empty Performance Center on Monday – but it was still business as usual for the WWE legend. A beer bash and a round of Stone Cold Stunners were the order of the day as the Hall of Famer celebrated 3:16 Day in style on this week’s Raw, even with the show taking place behind closed doors due to the coronavirus pandemic. Poor Byron Saxton may have wished he’d stayed at home though, after his night ended with a swift kick between the legs.

Stone Cold was in fine form even without a live crowd to feed off, as he declared 16 March a national holiday and rattled off a list of what makes it so special – including being allowed to use four letter words.

After bringing Byron – who was scoring each comment out of 10 – into the ring for a beer, Austin delivered the expected Stunner before Becky Lynch joined him for a beverage, and he laid the commentator out with another signature move. However, it looked like the Texas Rattlesnake got in a bit too snug with his boot, catching Saxton in the crotch – and he later took to social media to offer an apology.

He teased: ‘My sincere apologies to @ByronSaxton for kicking him dead square in the balls. I don’t know what hurts worse, his balls or my foot. ‘I will go in for X-Rays tomorrow. Byron, Ice em down for 20 minutes every other hour. That’s what Vince did. All the best. #316Day’

My sincere apologies to @ByronSaxton for kicking him dead square in the balls. I don’t know what hurts worse, his balls or my foot. I will go in for
X-Rays tomorrow. Byron, Ice em down for 20 minutes every other hour. That’s what Vince did. All the best. #316day

Thankfully, Saxton definitely seemed to see the funny side as he responded on Twitter, so there doesn’t seem to have been any lasting damage. He replied: ‘Thanks for the advice @steveaustinBSR!! I hope we are still cool? #316Day’ Well, it looks like that’s the bottom line – because Stone Cold said so!

Stone Cold Steve Austin reached peak popularity in the late 1990s by impersonating the gimmick of “Stone Cold Steve Austin”, an irreverent anti-beer drinker who routinely challenged the despotic federation leader Vince McMahon: this character has been described as the symbol of Attitude Era, one of the best boom periods in WWF history, and the “face” of the federation for four years:

speaking of its power to attract audiences McMahon and Jim Ross have indicated Austin as the most profitable wrestler in the history of the federation, so much so that in 1999 alone he managed to bring over 15 million dollars to the WWF coffers only with the sale of his shirts.

Austin has main evented multiple pay-per-view events for the WWE, including three WrestleManias (XIV, XV and X-Seven). He was forced to retire from in-ring competition in 2003 due to a series of knee injuries and a serious neck injury.

Throughout the rest of 2003 and 2004, he was featured as the Co-General Manager and Sheriff of Raw. Since 2005, he has continued to make occasional appearances and was inducted into the WWE Hall of Fame in 2009 by Vince McMahon.

In 2011, Austin returned to WWE to host the reboot of the reality series Tough Enough. During a long interview with Peter Rosenberg of ESPN, he talked about working with Vince McMahon: “Vince can read a crowd, and he plays to that crowd, and he just loves to be, as a heel, he would love to be hated so much, and of course, I was so over as a babyface,