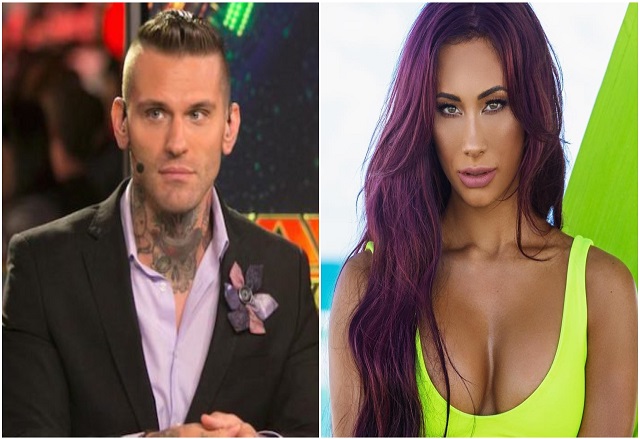 Carmella and Corey Graves made headlines when Corey compared their sex life to that of pandas in captivity. Total Divas star and WWE superstar Carmella (born Leah Van Dale) got candid about having a relationship in the public eye.

Most recently, after one candid Instagram live, the couple made headlines when Corey compared their sex life to that of pandas in captivity.

“[He] made it seem like he didn’t want to mate with me in quarantine,” Carmella told podcast host Justin Sylvester. “And he didn’t realize it was coming out of his mouth, that is was like insulting.”

As the WWE superstar continued, she indicated that her man didn’t mean anything by it.

“It got picked up by all these news sites and it turned into this huge thing,” she expressed. “And I’m like, ‘Oh, I’m great now that the entire world knows that you don’t want to have sex with me, so that’s cool.'”

At the time, Carmella said she was surprised by Corey’s claim as she was “throwing [her]self at him.” However, it appears she now understands the wrestling commentator’s point.

“Apparently, pandas don’t like to mate when they’re in captivity and that’s what he compared it to,” she expressed. “I was like, ‘Can you just clarify this for everyone and know it’s nothing that I’m doing wrong, ok? This is on your end buddy.'”

Per Carmella, Corey eventually realized his words were insensitive and apologized.

She added, “The internet blows everything up! So, he said one little thing—it was a joke—and then it turned into this whole thing. He’s like, ‘You think I don’t have sex with my girlfriend? Come on!’ But, you know how the internet works.”

Still, something positive came from this wacky experience as the idea for Bare With Us was born.

Carmella and Corey are no strangers to having details from their personal life appear in the press. As was documented in season 9 of Total Divas, Carmella was pegged as a homewrecker after Corey’s then estranged wife made infidelity claims on social media.

Like the wrestling maven reiterated on Just the Sip, the claims were unfounded but found life in the tabloids.

“He’s divorced. So, his ex put these allegations out there that were not true,” Carmella recalled. “And we were actually filming Total Divas at the time, so I was grateful that I was able to show my side of the story.”

Although the homewrecker claim had no merit, Carmella still faced some fallout from the rumor, including death threats.

“Honestly, it was super difficult. I’ve been in the public eye, but I’ve never been to a point where, you know, stories or allegations were coming out,” she reflected. “I didn’t think I was even on a level to where people would care about things like that.”

To make matters worse, for some time, Carmella wasn’t able to share her side of the drama or fight back.

“I was getting death threats, I was just getting all these awful things said about me,” she stated. “My grandmother’s calling me, ‘What is this? You’re on the New York Post about wrecking a home!’ And I’m like, ‘No!'”

Even though this drama “sucked,” Carmella was eventually able to tell her side of the story. Not to mention, she is still happily in a relationship with Corey.

“I just feel so strongly about him, I love him so much,” she gushed. “To me, he was so worth all of the bulls–t that we went through, and I adore his children. This wasn’t something I ever envisioned for my life, but now that I’m in this life, I couldn’t imagine it any other way.”

AJ Styles Says His Chemistry With John Cena “Was Unbelievable”