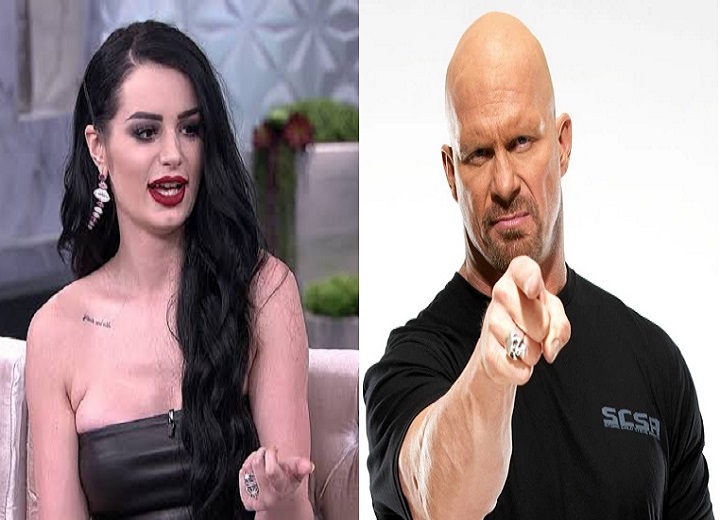 We all fall in love, we all have secret admirer, someone we wish we could have or date but for some reasons best known to fate, we just can’t have that guy/lady in our arms. For me, it’s me Mandy Rose, Paige, Lana or even Sonya Deville but for the former WWE Divas Champion Paige, it’s Steve Austin, Stone Cold.

Paige was interviewed by SI.com when she went to their office to do promo for the WWE wrestling video game.

In that exclusive interview, Paige revealed several sides about her life and career as well as she the man she wished she could call her husband.

It began like this:
SI.com started by talking about the annual WWE TLC pay-per-view and asked if Paige would love to have a more violent match.
Paige: Yeah. I definitely want some kind of match with a stipulation.

Then Paige was asked about her working relationship with Ric Flair and if she is by chance learning anything from the retired WWE Superstar.

Paige: Ric Flair has been nothing but a gem backstage. He’s definitely been a helping hand. We’ll do backstage promos together and I’ll say, “I’m going to say this really mean thing about you, is that okay?” And he’ll say, “Baby girl.

Go do your thing and make it entertaining.” He’s definitely been great to work with.

Paige: I’m not a huge video game person. I used to always play wrestling video games growing up. My brother used to have all the games so we would play together. I’ve played this one because I’m a character in it and that kinda blows my mind.

SI.com: Who would you play as when you were younger?

Paige: I’d always play as Stone Cold. I love Stone Cold. It’s a weird obsession and he should probably get a restraining order.

Paige: Badass … 100 percent. I was like, “I need my own quad bike to come down to the ring. I need to be chugging beers on the corner post. I need to get a hose and blast the McMahon family.”

Just at the heel, Paige was asked the very question on marriage and you can’t imagine who she actually wished she could call her husband. Your guess is as good as mine:

SI.com: if you could marry anyone on the WWE roster, who would it be?

Paige: Probably no one. Or Stone Cold.